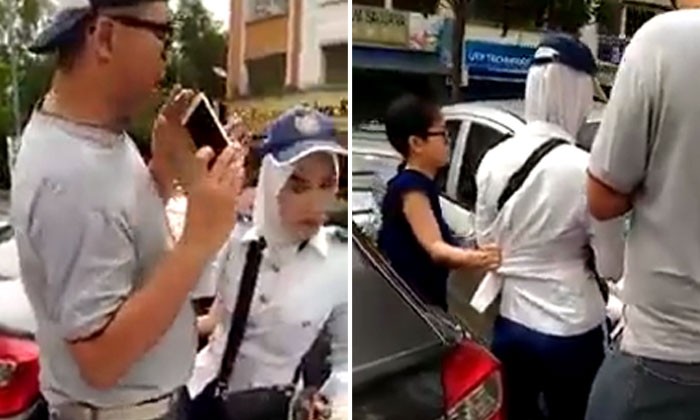 A parking attendant was harassed by a woman for allegedly hurting her arm and also by a man who was trying to get a picture of her in Malaysia.

In the All Singapore Stuff Facebook below, the parking attendant, a woman, is seen being grabbed by the shirt by a woman with short hair and a dark blue sleeveless blouse.

The parking attendant then tries to move away, but is blocked a man wearing a light grey shirt.

The parking attendant's work partner, also blocked by the man, tried to intervene and successfully handed her a phone to (possibly) call their manager or the authorities.

In the video, the parking attendant tries to break free from the woman and the man, but ends up being cornered, unable to move away from her harassers.

Towards the end of the video, a man wearing a red helmet came over and said, "She (parking attendant) is just doing her job", and tried to stop the duo from harassing the parking attendant.

The parking attendant and her work partner eventually left the scene.

Will you help a 'saman aunty' if you see one being bullied in public?

In early August, Stompe conducted a social experiment to find out how the public will react when they see a 'saman aunty' getting abused.

We got an angry driver who had just received a parking summons to yell at a parking aunty who issued it. This scene was staged at public carparks at Ang Mo Kio Central and Bugis MRT Station.

Apart from getting the 'angry driver' to verbally abuse our poor parking aunty, we also asked him to shove and push her.

Related Stories
Parking warden or king of the road? See how he parks bike right in the middle of Seng Poh Rd, causing jam
Man harasses telco employee with pictures of dead cats and nudes after being unhappy with service
"Are you an idiot?" Audi driver gets angry note after parking on two lots at Jln Bukit Merah carpark
parking attendant
Malaysia
harassment