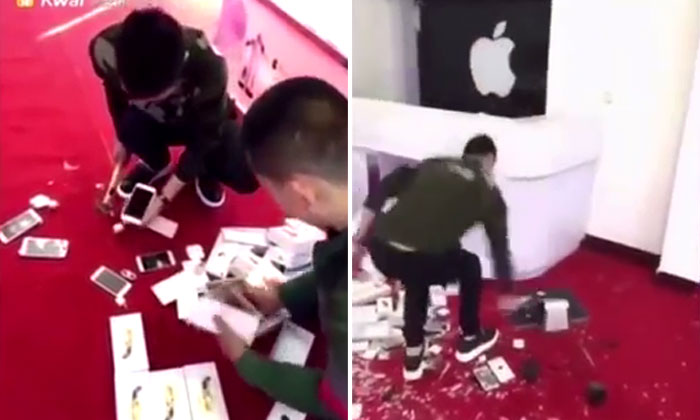 What do you do when you get so mad at customer service for not fixing your spoilt phone? Well this guy in China handled it in a rather unusual way.

When this angry customer wasn't able to get his phone fixed, he decided to throw a tantrum...and boy did that not go very well.

With a hammer in his hand, he destroyed not just the stock of IPhones in store, but also everything that was in his way -- the glass display boxes, laptops...everything.

He pretty much had a hulk smash moment.

According to ZockMe, he bought all the Apple IPhones in stock and smashed them with a hammer, in hopes to teach the arrogant shop owner a lesson.

You might be wondering, what in the world angered him so badly?

The shop owner who denied to fix the phone allegedly demanded the customer to buy a new phone if he had the money.

So the shop owner basically dug his own grave. Or did he?

The rich customer paid the entire bill in cash, and later laid all the devices on the floor, and destroyed it all with the hammer.

When the owner warned him not to smash up the store, the customer reportedly did just that.

So the shop owner gets his store messed up but gets paid in cash for all the Iphones in his store, while the customer loses his money and doesn't get his phone fixed.

Who's really at loss here?