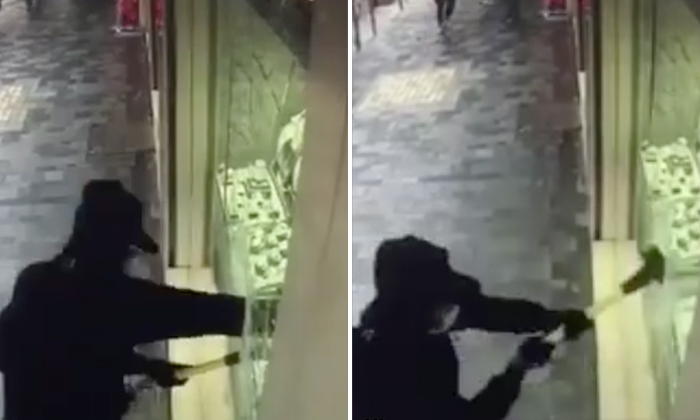 The thief was armed with a hammer, and had struck at a branch of 3D-Gold jewellery chain on the ground floor of Hai Phong Mansion, on Nathan Road near Tsim Sha Tsui MTR station reports The Coverage.

The Hong Kong police has confirmed the incident and labelled it as a smash-and-grab case.

“A man wearing a face mask and a hat used a hammer to smash the display window, and snatched the ring before fleeing on foot.”

So far, no arrests have been made.

A police source said that the thief had targeted the ring before executing his plans, and the police are in midst of identifying the culprit as well as mapping out his escape route.

A CCTV footage showed that the culprit worked alone and the ring was stolen in just seven seconds.

The culprit was seen hitting the window with his hammer six times, before grabbing the ring and fleeing.

No one was injured during the theft.

A spokeswoman for 3D-Gold told reporters that the theft had occurred just half an hour after the shop opened for business.

She also added that it was the first time that a thief had stolen something from the store since it first opened in 2011.

Watch a video of the CCTV footage below.