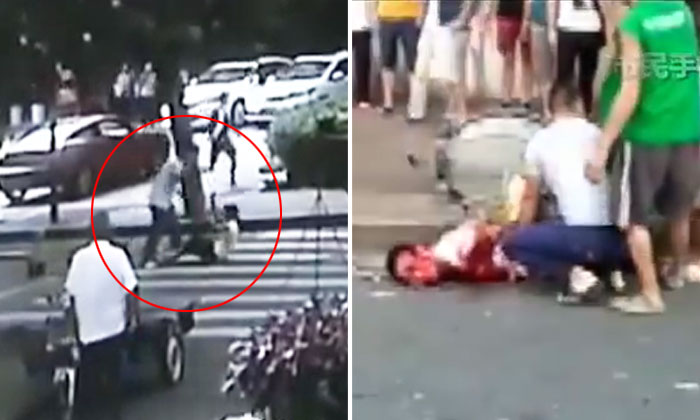 A video showing a woman being rescued from being beaten to death on a street in China has gone viral.

According to Shanghaiist, the incident happened on September 17 in Shenzhen.

A woman was out buying groceries when she was attacked by a man holding a weapon.

Surveillance footage showed the man punching, kicking and stabbing the woman on the pavement.

She tried to flee but could not escape the man's relentless blows.

Fortunately, a brave deliveryman named Lu Jinyue and a group of passers-by intervened.

He told reporters that he thought that it was a couple having an argument but when he got closer he saw the man holding a weapon and the woman covered in blood and pleading for help.

He grabbed a bamboo pole from another onlooker and attempted to hit the weapon out of the man's hand.

The man then gave chase to Lu before another person drove from behind and hit the attacker, knocking him to the ground.

A crowd then rushed in to subdue the man who was bleeding before the police arrived.

Both attacker and victim were then rushed to hospital.

Related Stories
My dad, the hero: Off-duty fireman comes to the rescue of child locked in lorry at Woodlands Blk 302A
A year after Sabah earthquake: Fiancée of hero who died saving pupils still wears ring
We can all learn from this kind foreign worker who helped old woman cross the road
rescue
heroes
assault
stabbing
Brave passersby stop man with deadly weapon from murdering woman on the street