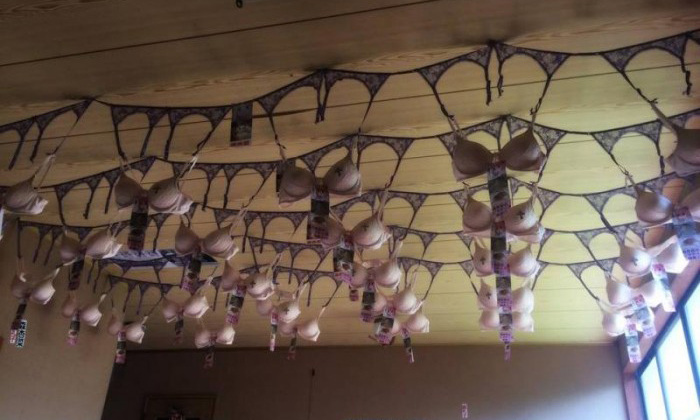 A shrine for secret sex occult activities or a crime scene?

You decide for yourselves.

Urban explorers in Japan have been posting photos on social media of an abandoned Buddhist temple filled with female lingerie.

Religious ruins like shrines and temples are scattered throughout the Japanese archipelago.

These derelict buildings are known as haikyo, and the explorers who seek them are haikyo enthusiasts.

One particular haikyo in Ibaraki Prefecture, just five-hours by train from Tokyo, is decked with carefully arranged bras and stockings.

The bras are strung on the ceiling in a neat fashion and their standardised design suggest that the lingerie were bought in bulk and hung for a purpose.

Odder still is a small naked doll impaled onto the wall with long nails.

Print-outs of graphically drawn cartoons and advertisements deck the walls.

Lest you think this is another shrine dedicated to the human genitalia or to pray for fertility, it's not.

Printed pamphlets next to the bizarre display explain that the site is actually an art installation.

Some haikyo enthusiasts found out that the temple was previously run by a group of swindlers and was eventually forced to shut down.

Of all the rooms on the premises, a hall containing ancestral tablets was the only one left untouched.

Enthusiasts have mostly kept the location of this temple under wraps, although some photos revealed a set of grimy stone steps leading to it.

Related Stories
'Saman' like no other: Cleaner in China surrounds illegally parked car with more than 40 rubbish bins
Giant skeleton of man measuring between 3m and 5m long found in Malacca cave
Disturbing festive photos that will make your Christmas anything but merry
Does this poor teddy at Plaza Singapura look a little... dead to you?
60-year-old man in Malaysia wheely does not want his car to be towed so he slides under it
strange
weird
bizarre
unusual
Japan.