Believe it or not, this is how China saleswomen promote gems, vacuum cleaners and even congee 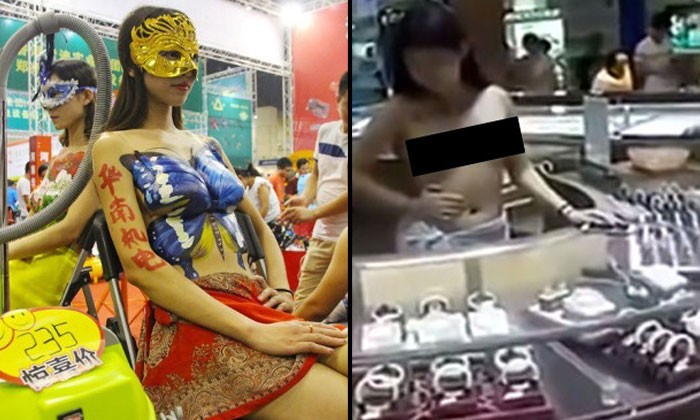 Most jewellery brands market their products through classy advertisements and a sophisticated retail crew.

Shanghaiist has however found a Chinese jewellery store using a different approach.

Last week, a Chinese citizen journalism website uploaded a video featuring a topless saleswoman manning one of the counters in a jewellery store.

In the video, her breasts were covered only by a pair of diamond-shaped nipple pasties. The woman& also looked like she was rather uncomfortable.

The creepy video was reportedly shot at a Lukfook Jewellery store in the mainland, according to Oriental Daily.

Lukfook has many popular outlets in both the mainland and Hong Kong, and Shanghaiist suspects that its bizarre promotion techniques probably have something to do with it.

This latest stunt has left netizens feeling appalled and offended.

Topless women made to sell vacuum cleaners? Does it work?

During an expo held in Henan, Zhengzhou city, in August 2015, one of the more innovative enterprises stole the show with their flashy marketing -- two willing models, a can of body paint and some masks to protect their identity, reported Shanghaiist.

The marketing ploy was definitely successful considering the diverse crowd of creepers it drew, all trying their best to capture the perfect picture on their smartphones.

In attempts to beat it's competitor with bikini-clad waitresses, Shenyang restaurant decided that hiring topless models as waitresses was the way to go.

The women were clad only in body paint, bikini bottoms and nipple covers, reported Shanghaiist.

Unfortunately, the restaurant reportedly adopted this idea only to promote a Halloween event.

Do you think this marketing strategy is demeaning to women Let us know in the comments below.