Aww! The world's smallest couple have tied the knot in London 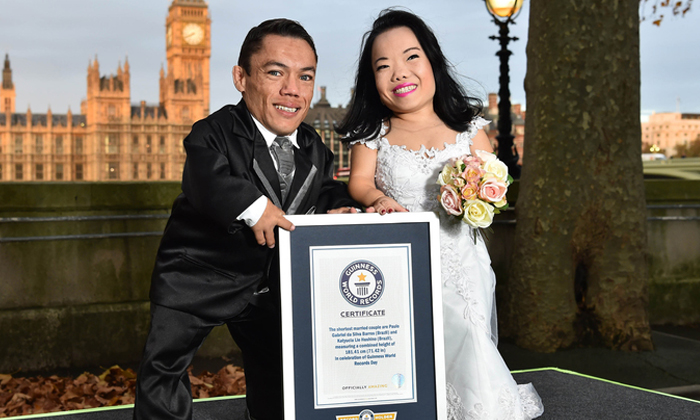 It was a breakthrough for the pair who not just tied the knot in London, but set a Guinness World Record for being the world's smallest married couple.

The par met on social media 10 years ago. While Paulo has diastrophic dysplasia, Katyucia has achondroplasia dwarfism.

Despite their physical condition, Paulo works as a legal secretary and Katyucia a beautician.

"The first time I started talking to Paulo, he was really annoying. He had cheap pick-up lines," said Katyucia,

"She thought I was trying to flirt but I was just being nice. According to her I was a really boring guy."

Though the duo did not exactly hit it off straight away, things got better.

The next time they met, Paulo made a 186 mile trip to visit her in her hometown of Londrina.

"(On our second date) He was wearing an orange shirt, jeans and sunglasses. Thank God it has improved since then," said Katyucia.

"Basically, we are a normal couple but our height is a little smaller.

"The best thing about our relationship is our closeness, our companionship we have for each other.

"She supports me in everything. She's my little warrior."

And what they said in a joint statement after the marriage is also pretty cool:

"We hope our new record will encourage the world to look past the physical differences in others and understand all people should be treated equally."