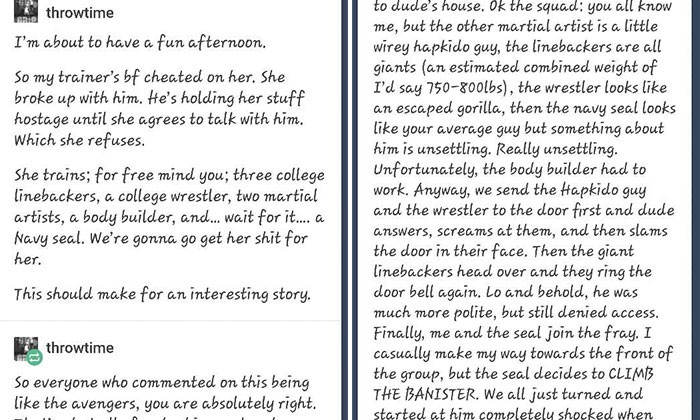 Three universities' rugby linebackers, a college wrestler, two martial artists, a bodybuilder and a Navy seal are a force to be reckoned with, especially if you cheat on their trainer.

Their trainer just broke up with her boyfriend who refused to give her all things back without a meet up.

So, her students decided to retrieve her items for her without her knowledge.

Screenshots of a tumblr post were posted on Hipster England's Facebook page and was captioned as 'the best thing thing I've read all day' by Hipster Monaco.

No violence was involved but a lot of passive hostility was shown until the ex-boyfriend got what he deserved.

Sweet revenge was served and eight people who did not know each other formed a camaraderie.

A netizen commented, "This is literally the most beautiful and thrilling tale. From start to finish."

Check out the gallery above to read the exciting story of friendship and loyalty.

Related Stories
Woman's ex-BF started showing up wherever she was: 'I constantly felt haunted'
Guy tries to make ex-GF jealous -- but ends up being the one to go into a rage
4 signs an ex is worth a second chance
relationships
crazy ex
cheat
friends
trainers
students