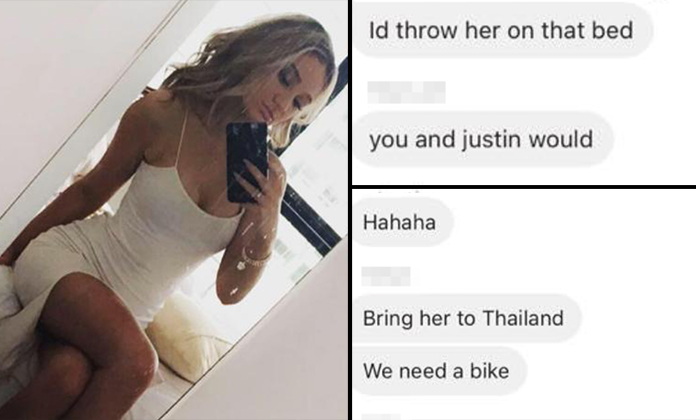 Eleanor Henry, a 22-year-old law student from Melbourne University was added into a boys' group chat where she had privy to their chat history-which was predictably unpleasant.

When the boys realised she could see their previous chat messages they quickly removed her, but not before she took some screenshots.

They were mostly talking about Eleanor herself, calling her things like "bike" and talking about how much they wanted to sleep with her.

She shared the screenshots on Facebook and wrote: "Let's all wave hello to my fellow peers at Melbourne University. This is why I'll die a feminist. It's 2016. Let's get back to that conversation on equality."

Eleanor told Daily Mail that she knew two of the men in the chat as she met them on a university group assignment.

She was disgusted by the chat and said: "My stomach dropped and I felt really sick, to the point where I felt I needed to close my blinds and hide under my blankets."

The two boys have since apologised to her and she has received a Facebook message from another guy asking Eleanor to take the post down.

The boy said: "I don't think posting something like that publicly will do anyone any good. If you were so offended I apologise."

Eleanor told him off, saying that he was only sorry because he got caught.

Eleanor also told the Daily Mail that she posted the screenshots not to "publicly name and shame the men" but to bring awareness to "this kind of rape culture".