Another shocking attack caught on camera: Man gets whacked by pole as he tries to defend himself and plead for mercy 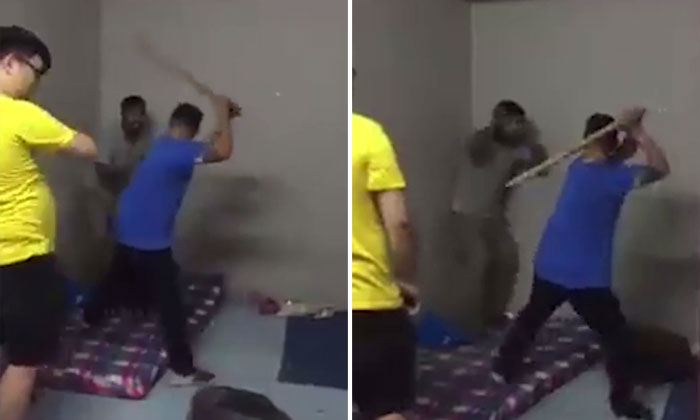 Remember the recent viral video that featured a group of youths bashing up a young boy?

There is a new similar video circling around the web, and Stomper Mohan was one of the many who received the video via WhatsApp yesterday (Nov 28) at around 8pm.

The video features a man pleading for his life while being beaten up brutally by another with a bamboo stick. His cries for them to stop also went ignored by his attacker and another guy.

The man can be seen trying to defend himself with a messenger bag, as his "bully" cornered him and continued to hit him with the giant bamboo stick, ignoring his pleas for it to stop.

The other man in the room simply looked on as the poor man was beaten up mercilessly.

It is unclear what did the man did to deserve such treatment, and where exactly this took place.

Stomper Mohan shared some of his thoughts on the video:

"Someone forwarded this video to me and I was very upset to see a man beating up a young man mercilessly.

"This type of people should be punished, they have no authorities and they decide to take the law in their own hands. If no one takes action on such things, they will definitely do it again.

"Since the video is already there, I am sure it will be easier for the authorities to take action. And I sure hope they do soon."

What do you think about this situation? Watch the video and share with us in the comments below.