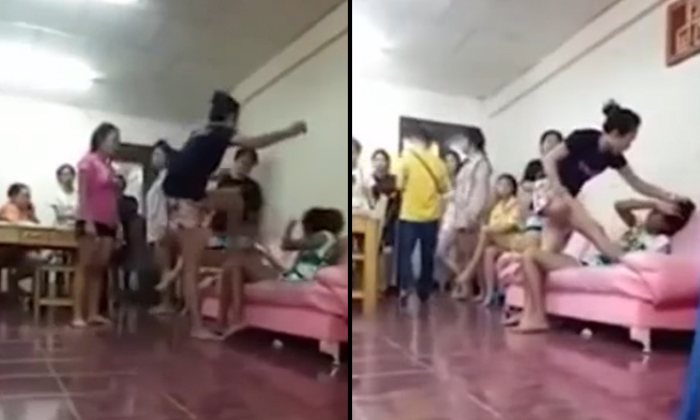 A furious wife confronts her husband's mistress at a house party and kickboxes her in the head nine times.

The woman launched the vicious attack on the timid girl at her home after discovering her husband had been having an affair with the woman in Bangkok, Thailand, The Lad Bible via Daily Mail reports.

In the video below, the woman unleashes a series of powerful Muay Thai style kicks to the homewrecker's head, along with savage slaps and hair pulling in the two-minute long attack.

Her friends eventually calm her down and she backs off, leaving the shaken girl to recover on the sofa from the assault during the house party.

Onlooker Ploy Tapadchum, who filmed the video, said the love triangle had turned violent after the husband admitted he had a 'side chick'.

"The wife was very, very angry and confronted the mistress at her own house.

"She had been dating her husband, who thought it was good to have a side chick.

"She fights her and the girl didn't resist. She knows she was in the wrong.

"It was very cruel and her friends were there watching, so nobody could stop it.

"She did wrong by taking another girl's man but it is not right to beat the girl like this. Though most people can understand her anger."

Ploy said she wanted people to see the footage, and that police were not interesting in getting involved.

Related Stories
Woman shames cheating boyfriend by dumping everything he owns at work
This wife's revenge on husband caught cheating on Tinder is nothing short of epic
Guy uses drone to catch wife cheating
Guy catches pregnant wife cheating on him and plans to murder her lover but can his friend stop him?
Married 40-year-old man falls in love with 20-year-old colleague -- and seeks advice
cheating husband
caught cheating
mistress
cheating
affair
thai