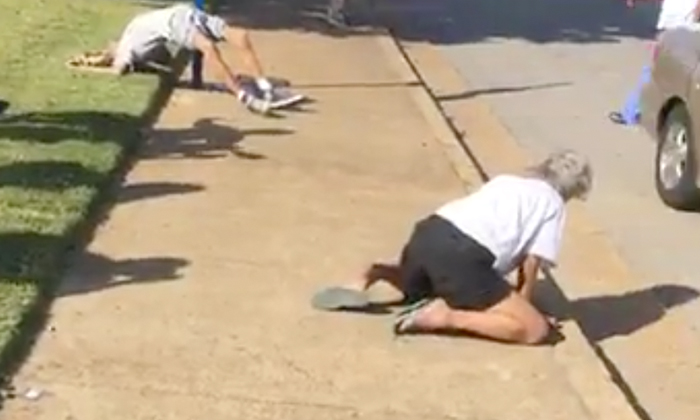 A video from Tennessee, United States has emerged, showing a couple overdosing on heroin by the sidewalk as people look on.

The woman can be seen kneeling on the floor while the man is in a back-breaking position nearby. A crowd gathers around them, snapping photos and laughing at the spectacle.

The nine-minute video was captured by aspiring rapper Courtland Garner via Facebook live and he can be heard making running commentary.

Garner says things like "damn they’re on some good dope" and joked that the man was on a conference call upon seeing that he was clutching a phone.

The video has been viewed more than 2.6 million times and shared over 27 thousand times.

Many users wrote that the couple did not deserve sympathy and served as a warning to others. However, Garner was slammed for not helping the couple and making light of a serious situation.

User Shawna Gregory said "It's sad how people act. Instead of checking on them and waiting for police, everyone including the dude filming made jokes constantly."

According to WREG-TV, police investigations revealed that the couple had snorted heroin in a bathroom nearby. The couple was later revived and taken to hospital in a stable condition.

The woman, Carla Hiers, remains in custody due to a warrant calling for her arrest.

Garner defended himself, saying  "I know for a fact all the kids are on social media, and when kids see that video, you know what they are going to say? I don't want to look stupid like that I don't want to do those drugs."