A mother's love: Dog with broken leg walks 3.2km to seek help for her puppies 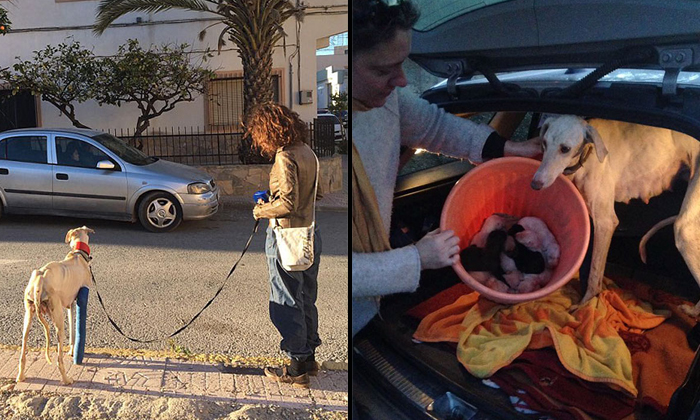 When psychologist Lianne Powell, 49, came across a limping greyhound in a market in Vera, southern Spain on Jan 14, she brought the dog to a local vet for treatment.

The vet, 39-year-old Ellen Sobry, found that the malnourished dog had a badly broken leg... and was also producing milk and bleeding from the back, a sign that she had just given birth five to seven days prior.

“We saw she was producing milk, so somewhere she had puppies,” Ellen wrote in a Facebook post.

Hoping to find the puppies, they put a collar and long leash on the greyhound, whose leg was still in a cast, and then proceeded to follow her for over 3km, Ellen said. The greyhound brought them “somewhere in the Campo in Vera, into a derelict house”, where they found the dog’s ten newborn puppies inside a car on the backseat.

A video she posted on her Facebook page shows the dog leading Ellen and Lianne towards the car where the puppies were.

“In the state she was in, the fact she managed to fend for herself and care for 10 pups is nothing short of astonishing,” Ellen told the Daily Mail.

The dog, now named Vera after the city she was found in, is believed to have been dumped by hunters.

She is currently recovering at Ellen’s clinic with her puppies.

“Vera and her puppies are doing fantastic and they are all healthy.”

Watch the video of Vera leading the humans to her puppies' rescue below.