64-year-old woman may be China's oldest mother of newborn 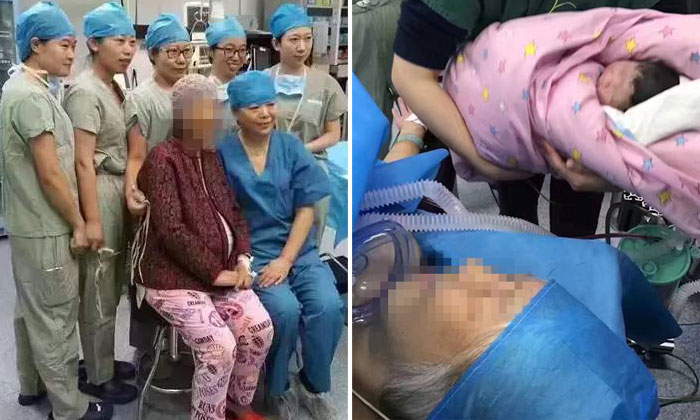 A 64-year-old woman in China has given birth to a healthy baby boy by Cesarean section.

She is in stable condition despite giving birth at her advanced age.

Photos of the woman and her baby were posted by a Sina Weibo user.

One photo shows the gray-haired mother looking at her baby and another shows her surrounded by medical staff in the delivery room at the Second Hospital of Jilin University in Changchun.

The photos went viral and many wished the mother well.

According to China Daily via AsiaOne, the doctor in charge of the delivery, Teng Hong, was deeply touched by her bravery.

She said that she got pregnant through in-vitro fertilization and was in charge of her care since the 13th week o0f gestation.

"She was an elderly pregnant woman and lost her only child previously, so she faced both psychological and physical pressure," Teng said, "But every time she came in for a check, she was smiling and gentle, and was brave enough to face the changes of the whole pregnancy."

Aged pregnant woman face risky health problems and the 64-year-old was not spared either.

She was found to have gestational diabetes in the 28th week and total placenta previa in the 30th week which can be life-threatening due to the risk of hemorrhaging.

"She trusted us wholeheartedly by doing exactly what we told her to do and kept in good spirits every day," said Teng, "When her situation went well, we let her stay at home."

After the operation went smoothly, the woman reached her hand out to touch Teng's face and said:

"Thanks for your hard work."

"I was really moved at the moment, and my nerves, which were tense for months, were eventually stretched," Teng said.

Teng added that the woman is the oldest she has accepted as a patient and may be the oldest in the country.