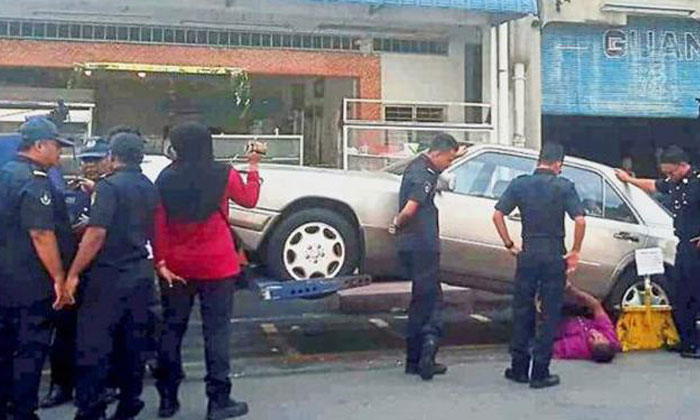 How would you feel if someone wanted to take away something very precious to you? Angry? Protective maybe? Let's check out how this 60-year-old dealt with a similar situation.

A restaurant owner who recently slid under his car to stop the local authorities from towing it away, is now being investigated for obstructing a public servant from carrying out his duty.

According to a report by The Star, Seberang Prai Municipal Council (MPSP) officers and a number of policemen had to pull the man out from under his son's gold Mercedes Benz in Jalan Danby, Malaysia, on Thursday (Dec 8).

The officers had spotted the car parked in a motorcycle parking lot in front of the man's restaurant at about 11.30am, and blew their whistle thrice for the vehicle to be removed.

Having seen no response, the officers decided to lock one of the tyres.

The restaurant owner then stormed out of his store angrily, and refused to pay the fine to unlock his car tyre.

"He was told that his car would be towed to the MPSP office in Jalan Betik, but he still refused to pay. The officer subsequently called for a tow truck at 2.40pm."

"The man then slid under the car to prevent it from being towed away. He was forcefully removed by the policemen and taken to the Bukit Mertajam police station," the officers stated in a police report.

Central Seberang Prai OCPD Asst Comm Nik Ros Azhan Nik Abdul Hamid said the policemen and MPSP officers tried to advise the man to come out from under the car, but he refused.

"Several witnesses said he was rude to the MPSP officers and prevented them from carrying out their duties," he said.

The restaurant owner has since been released on police bail and the case, under Section 186 of the Penal Code, will be referred to the state deputy public prosecutor's office for further action.

MPSP councillor Michael Tan said there were signboards in the area warning motorists that it was a towing zone.

"The MPSP enforcement personnel were carrying out their duties and I urge motorists to deal with such situations in a tactful manner as this kind of behaviour will not resolve anything."

What are your thoughts on this situation?