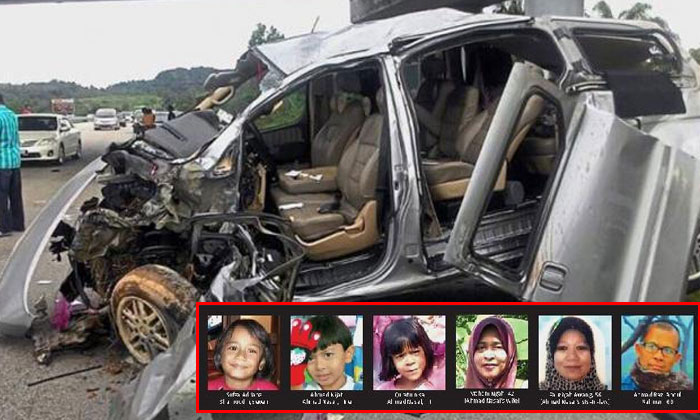 Minta maaf. Minta maaf. Saya minta maaf sangat sangat (I am sorry, I am truly sorry). Those were the words a distraught teacher Ahmad Nasal Abd Rahman, 52, kept repeating from his hospital bed in Kemaman.

Ahmad Nasal was the man behind the wheel when an MPV went out of control before hitting a divider and ramming into the pillar of an overhead bridge near the Chukai toll exit of the East Coast Expressway. Six people, including three children, were killed in the crash.

The man, who was in tears, just could not forgive himself for what had happened. Among the dead were Ahmad Nasal's wife Mahani Ngah, 42, his daughter Quratulnisa, 11, and his son Ahmad Nijat, nine. The others killed were Ahmad Nasal's elder brother Ahmad Razi, 63, sister-in-law Pauziyah Awang, 56, and Ahmad Razi's grandaughter Sofea Adriana Shahruddin, seven.

Ahmad Nasal suffered minor inju­ries and was sent to the Ke­­maman Hospital together with his three other children - Quratul Ain, 14, Ahmad Shakir, 12, and Ahmad Mukriz, three - who were badly injured. They were all later transferred to the Sultanah Nur Zahirah Hospital in Kuala Terengganu.

"I met Ahmad Nasal to ask him if he wanted to see the remains of his wife and children before they were buried yesterday morning.

"He just kept on crying and said I am sorry, I am sorry and said he could not bring himself to see his dead family members," Mohd Aziruddin Majid (Mahani's brother-in-law) said yesterday.

Meanwhile Mahani's father Ngah Omar, 73, a retired TNB employee, said what he had feared had happened. "My entire world collapsed upon hearing the news. But what can we do if this is what fate has determined," he said.

"One Sunday night, as I sat to watch the news, we were informed about an accident which killed six people. I told my wife that such tra­gedy should not happen to any family, including ours.

"It did not cross my mind at all that the accident actually involved my daughter, grandchildren and other family members. It was about 15 minutes later when a relative came over to our house to inform us about what had happened," he said when met at his house in Kampung Durian Guling here yesterday before the remains of his daughter Mahani (second child of seven) and two grand children were buried.

Ngah added that he had spoken to Mahani on Saturday and she told him that she would arrive on Monday or Tuesday after attending an event in Shah Alam.

"I never ever imagined that she would arrive wrapped in the shroud," he said.

Another brother-in-law of Mahani, Ali Embong, 52, an officer with the Veterinary Department in Kuala Terengganu, said he too saw the pictures of the accident in the WhatsApp group at about 7pm.

"As usual, I received a lot of photos via the WhatsApp group but it did not at all strike me that our family was involved.

"When I came back from the mosque after the Isyak prayers, my wife told me the news. The vehicle in the WhatsApp was that of our own family member," he said.

The two families were travelling to Kuala Terengganu for a holiday from Shah Alam, Selangor when Ahmad Nasal lost control of the vehicle after its left front tyre blew.

The vehicle then hit into the highway divider before spinning and ramming into the pillar structure of the overhead bridge.

It was learnt the group had earlier attended a Aqiqah ceremony in Felda Jengka in Pahang and were on the way to meet Ahmad Razi's grandson who is studying at Universiti Sultan Mizan Zainal Abidin in Gong Badak near Kuala Terengganu.

Yesterday, Mahani and her two children - Quratulnisa and Ahmad Nijat - were laid to rest in one grave at the Kampung Durian Guling Muslim cemetery at about 10.30am.

Ahmad Razi, his wife Pauziyah and their granddaughter Sofea were laid to rest at the Section 21, Shah Alam Muslim cemetery.