2 Malaysians caught with almost 100kg of drugs in Thailand 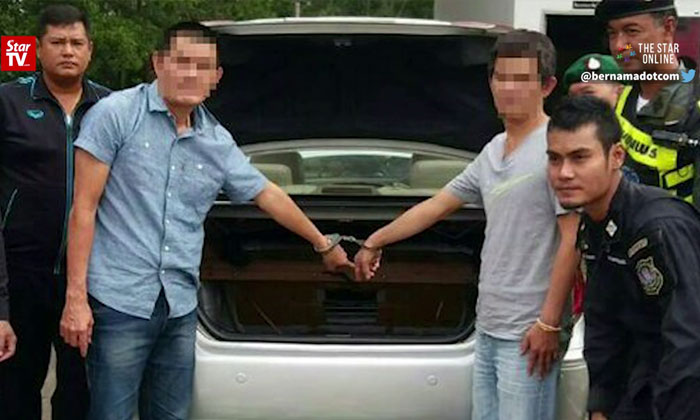 KUALA LUMPUR - Two Malaysians were caught with almost 100kg of heroin and "crystal" methamphetamine worth millions in their car in Chumphon, southern Thailand, last week.

When asked if the two arrested had connections with drug syndicates in Malaysia, Comm Mohd Mokhtar said it was too early to conclude as investigations were still ongoing. He also called on the public to co-operate more with the police to battle the drug menace more effectively.

"The best weapon against crime, especially the drug menace, is co-operation between police and the public," he said.

It was reported that the two suspects thought that travelling in the early morning meant they would have an easier passage to their destination, Hatyai.

They assumed the authorities manning the checkpoints along the route would be exhausted after working long hours.

"They became nervous when their car was stopped at a checkpoint in Chumphon at 8am on Dec 11. They had been driving for hours from Bangkok," Thailand's Narcotics Suppression Division acting chief Maj-Gen Dusadee Choosankij was reported as saying.

The two Malaysians were arrested in Chumphon, several hours from their intended destination, added Maj-Gen Dusadee.

They will be charged and if found guilty, can face life imprisonment in a Thai jail.

Maj-Gen Dusadee said the two Malaysians were contracted to transport the drugs worth millions to an unidentified person in Hatyai, who would then take the package across the border to Penang.

He also disclosed that while under detention, the two men continued to receive phone calls from syndicate members eager to seek information on the drugs.

"We have checked the telephone numbers and the calls were made from Penang," he said.

Upon learning that the two men had been arrested and the drug-trafficking plan had failed, the syndicate members sent chilling photos to the men, he added.