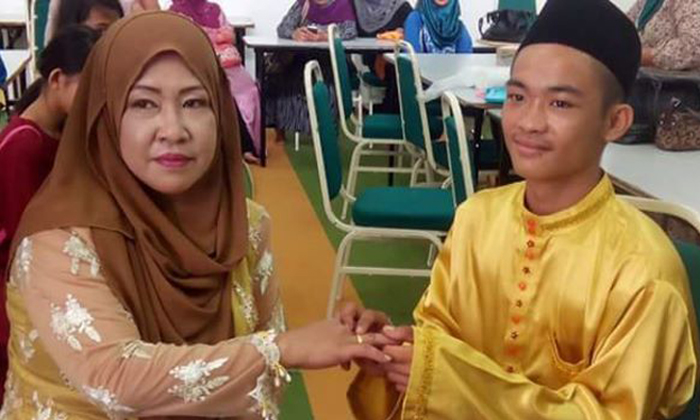 It’s not every day that a man chooses to marry a woman twice his age and receives the blessings of his family.

But that is exactly what happened in the town of Kuala Penyu in Sabah, when 18-year-old Mohd Sufie Alin wedded single mother of five, Dayang Sopiah Gusti, 42.

A picture of Mohd Sufie putting a gold ring on Dayang Sopiah’s finger during the solemnisation ceremony went viral on Facebook on Friday, garnering plenty of mixed reactions from netizens.

However, the groom is at least be assured in the belief that his family approves of the unusual relationship.

“They are mature enough to make their own decisions, including getting married,” his father Alin @ Matalin Utam, 52, told Harian Metro.

According to the father, the two got married in a small ceremony at the Beaufort district mosque on Tuesday, attended by families from both sides.

“What is important is that Sufie did not disturb someone else’s wife and they wish to continue their relationship the Islamic way.

“Therefore, I have no problem and consider Sopiah to be the soulmate of Sufie, which has been decided by God,” he told the Malay daily.

Though surprised to hear about his son’s choice just days before the wedding, Alin said age was no barrier.

“I was able to advise Sufie to be a responsible husband as he does not only need to care for his wife but also his five stepsons,” he added.

Related Stories
71-year-old woman marries 17-year-old guy after meeting him at her son's funeral
Man's ex-wife says he wouldn't be able to find another woman -- and he proves her wrong
More About:
Wedding
couple
unusual