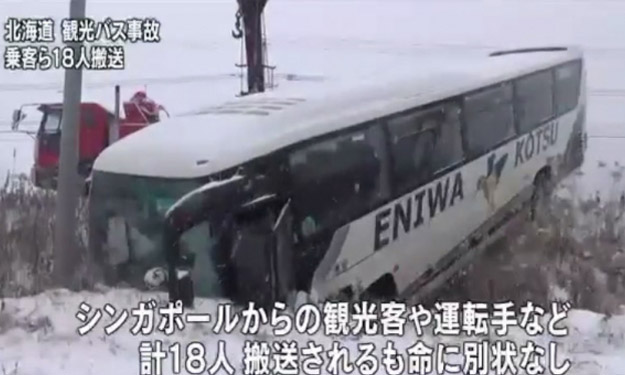 The Chinese daily said on its website that the bus hit a railing at around 11am while travelling along a highway in Furano.

The 16 tourists and one tour guide were injured. No one was killed, Lianhe Zaobao quoted police as saying.

A spokesman from Singapore's Ministry of Foreign Affairs said that the Singaporeans were treated for light injuries and have since been discharged from their respective hospitals.

The Ministry added that the Singapore Embassy in Tokyo has been working closely with the local Japanese authorities and the Singaporean tour company to render consular assistance to the affected Singaporeans.

This is the second accident involving Singaporeans in Hokkaido in recent months.

On Oct 23, a bus carrying 33 passengers from Singapore was involved in a head-on collision with a truck. The drivers of both vehicles were killed, while 14 were taken to hospitals.