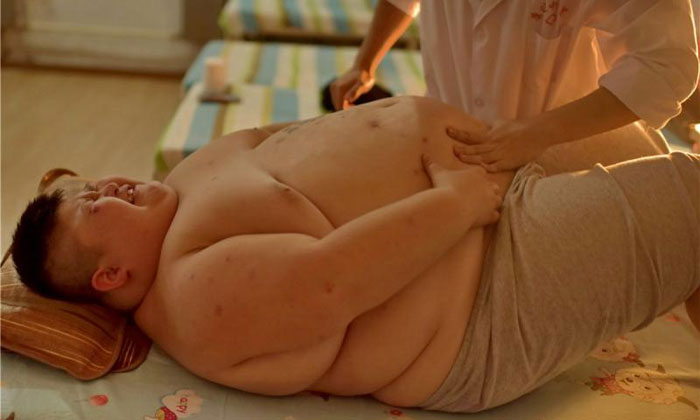 An 11-year-old boy has been gaining weight since he was diagnosed with the Prader-Willi Syndrome when he was three years old.

Li Hang from China now weighs 143kg after shedding some weight recently thanks to traditional Chinese medicine (TCM). Before that, the 1.5m tall boy weighed in at 167kg, reports China Daily via AsiaOne.

He has undergone cupping therapy as well as acupuncture.

The Prader-Willi Syndrome is a genetic disorder that involves an abnormality with chromosome No 15 and occurs once in every 15,000 births.

When he was born, he weighed 2.7kg and his mother thought he was malnourished.

However, from the age of three he developed an insatiable appetite and tipped the scales at 43kg when he was just four years old.

Despite his growing weight, his mental development stalled and he is now emotionally unstable with poor numeracy skills.

The disease cannot be cured but early detection and treatment can improve the patient's quality of life.

Li tried a series of weight loss regimes before he turned to TCM but they did not have any effect.

In March this year, he underwent a partial gastrectomy, a surgical procedure where a part of his stomach was removed.