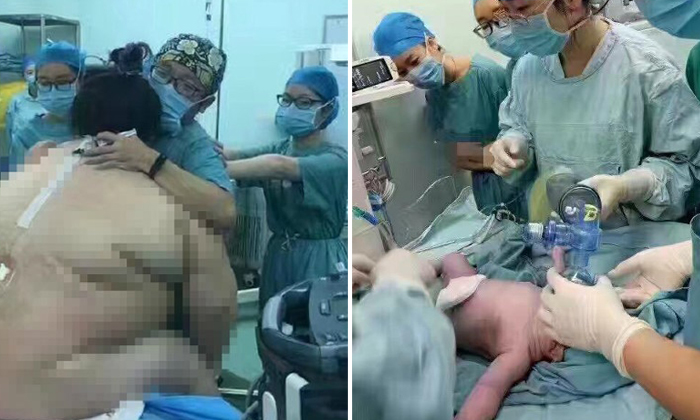 A 280-pound (127kg) woman successfully delivered a healthy baby at a hospital in Changsha, China recently.

As they have never encountered such an overweight mother before, hospital staff initially had to call for a quick conference to discuss important details like how much anesthesia to give her.

According to Shanghaiist, a distress call was sent out to various departments around the hospital and 16 medical workers came to help out with the delivery.

Pictures of the unusual operation have been circulating online and invited many unkind comments.

One Weibo user said, "Before getting pregnant, you should be aware of this problem. Maybe her weight doesn't matter to her, but she is about to bear the weight of two lives. She should have lost a few pounds, otherwise she isn't being a responsible mother.

Another quipped, "I just want to know what her husband is like,"

However, there were also those who came to the woman's defence.

"For women, giving birth is never easy. No matter what, she has now become a mother. More than anything else this is a blessed step in her life. I think she is really great," wrote on netizen.

Some also pointed out that it was an invasion of privacy to take photos during the delivery and while the mother was naked.