Boy, 11, dies after beating from school warden in Malaysia and going into coma 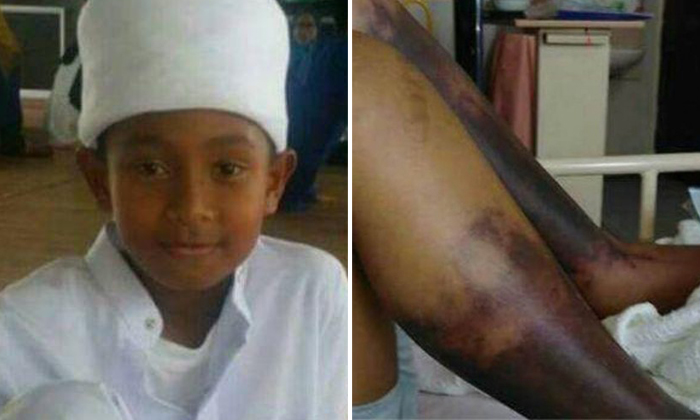 The 11-year-old boy who was allegedly physically abused by an assistant warden at his school has died.

According to The Star, the victim's father confirmed that his son passed away at around 2.05pm at Hospital Sultan Ismail today (Apr 26), while prayers for his recovery were being recited.

Mohamad Thaqif Amin Mohd Gaddafi was due to have his right arm amputated earlier today, but the surgery was cancelled because of his unstable condition.

After being allegedly abused by a religious school warden, a boy has had his legs cut off to save his life.

Doctors said both legs could not be saved as blood cells and tissues were destroyed due to bacteria infection. The 11-year-old is now in a coma. His condition has worsened as his right arm was also swollen due to an infection.

According to the boy’s mother, her son’s nightmare started last month.

She enrolled him at a privately-run religious boarding school in Kota Tinggi in January.

“I found out about the school on Facebook and registered him there,” she said when met at the Sultan Ismail Hospital here yesterday.

The 40-year-old teacher said that when she visited her son last month, he appeared weak and tired.

She said she was worried and requested the school authorities to send him back home on March 31.

“He had begged me to transfer him out, saying he was being abused and could not bear the pain and torture,” said the teary-eyed mother.

The boy is the third of five siblings.

Several days later, the boy had fever while bruises and swelling started to appear on his legs.

“He complained of body ache. So we took him to a clinic and transferred him to a hospital after his situation worsened,” she said.

Apparently, they had made noise at the school’s prayer room. The warden has since been suspended by the school.

“We also found that the mother had given a painkiller to her son. The pills are postnatal medicine which she took,” he said.

Police have detained the warden to assist in investigations under Section 31(1) of the Child Protection Act.

Johor Islamic Religious Department said it would conduct an investigation over allegations that a student was abused with a water hose.

State Islamic Religious Committee chairman Abd Mutalip Abd Rahim said they viewed the matter seriously and would check if the school was registered with the department.

“Hitting students, even with a rotan, is forbidden. Hence, using a water hose is even worse,” he said.

“Both his legs had to be amputated on Fri­day. He is now in a coma and on dialysis treatment due to kidney failure,” he said.