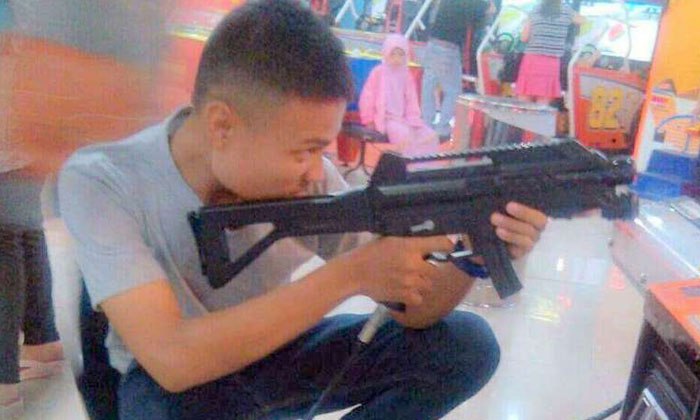 When that friend, Hadi Gusti Yanda, 20, tried to cajole him into joining a terror group called Katibah Gonggong Rebus, or Boiled-Snails Cell, he decided he had enough.

"All these radical stories about suicide bombings didn't make sense to me. He asked me to join, but I refused," Mr Tegar told reporters yesterday.

He was among six suspected militants arrested in anti-terror raids by Indonesian police last Friday, but was released the same evening as he was not "the target of capture", he said. His friend Hadi remains in police custody.

The group's ringleader, Gigih Rahmat Dewa, 31, is facing multiple charges, including one of plotting to fire a rocket from Batam to hit Singapore's Marina Bay and another of aiding Indonesians to go to Syria to fight alongside Islamic State in Iraq and Syria militants.

Mr Tegar said he was persuaded by Hadi to attend the cell's first meeting some time in 2013.

"Hadi told me that nobody there knew one another. They only communicated via chat groups in WhatsApp and Blackberry Messenger." However, he found that the group talked only about religious issues which did not interest him, he said.

"I felt really awkward and uncomfortable. I told him (Hadi) I wanted to go home as soon as possible."

After that, Hadi stopped talking about the group's activities.

Mr Tegar told reporters that he and Hadi loved watching movies and attending metal music concerts together. They even worked at the same factory in Batam. But he noticed his friend had changed in the past three years.

"He prayed more often. Of course, I was happy to see that. I told him it's okay if he taught me to pray as long as he stayed out of the group," he said.

Mr Tegar said he had no clue the group was involved in terror activities or was planning to launch a rocket targeting Singapore until last Friday, when a police car stopped the two of them as they headed to work. Mr Tegar had gone to Hadi's house to give him a ride on his motorcycle as Hadi's own motorbike had broken down.

Police blindfolded and handcuffed them before taking them to the Brimob special police headquarters for questioning. When they arrived, Hadi was taken away while he was made to wait in the car, Mr Tegar said.

"The two police officers seemed more friendly towards me. They even said sorry when they arrested me," he said. He was released that evening after questioning.

When reporters visited Hadi's home, his father declined to be interviewed.

Terrorism analysts have said that new extremist cells like the Katibah Gonggong Rebus illustrate how the militant network in Indonesia has become loose and fragmented, and could be formed by a small number of individuals.

Terrorism expert Noor Huda Ismail, founder of the Institute of International Peace Building, told The Straits Times that these small groups are hard to detect and that they use social media and mobile messaging to interact with one another.

"Their terrorist action plans were in Facebook," he said, without giving details.

What also gave Gigih away was his new profile picture on the Line messaging app featuring a banner pledging "Indonesian support and solidarity for ISIS", Reuters said.