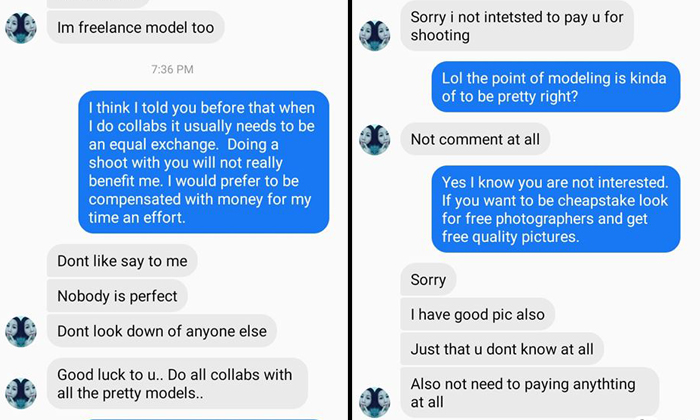 A woman who identified herself as a freelance model approached a photographer to shoot photos of her, but was extremely baffled when asked to pay for his services.

This led to a hilarious conversation between the two that has since gone viral online.

The saga appeared to have first started when the model, known as Kylie Chong, called out professional photographer Benjamin Matchap on her own Facebook page.

Kylie had shared a screenshot showing part of her conversation with Benjamin and accused him of "looking down" on people.

The original post, which included a photo of Benjamin, appears to have been taken down.

The screenshots show how Kylie had first commented on professional shots that Benjamin had posted of another model and asked when it would be her turn.

Kylie also messaged Ben and asked if she could do a photoshoot with him.

When Benjamin informed her of his rates, Kylie was perplexed and responded, "Huh, how come?"

Benjamin then explained to her how the industry works, but Kylie replied that "nobody is perfect", before accusing him of looking down on her and only collaborating with pretty models.

She also said: "Sorry I not interested to pay you for shooting.

"I have good pic also, just that you don't know at all."

Benjamin's post has since garnered over 1,500 shares, with many netizens slamming Kylie for her self-entitlement and poor command of English.

In a separate post, Benjamin shared another screenshot that showed Kylie offering to pay him after the shoot. He also described her as "cheapstake, rude and entitled."

View the full conversation in the gallery or on Facebook.