Former nurse helps uncle who fainted at Junction 8, stays with him until ambulance arrives 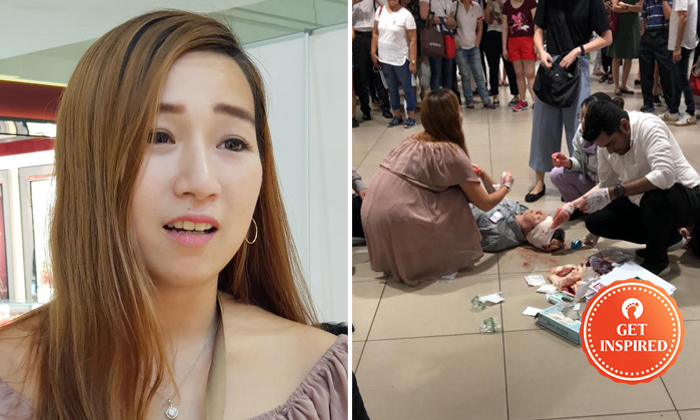 A former nurse has been lauded for helping a man who fainted and injured his head at Junction 8 shopping mall last Thursday night (Aug 22).

The incident occurred on the ground floor of the Bishan mall at around 8pm.

Mr Li, 30, told Shin Min Daily News that he was passing by the area after work when he saw a huge crowd at the scene.

He said: "I went forward to take a look and realised an uncle was lying on the ground. His head was bleeding and there was also blood on his hands.

"Three members of the public were attending to him."

According to an employee at a nearby shop, the man had fainted and hit his head when he collapsed.

Shin Min spoke to one of the Good Samaritans who helped the man and learnt that she had previously worked in the A&E department of Tan Tock Seng Hospital (TTSH).

Now a financial consultant, Ms Michelle Kok shared: "I heard that someone had fainted and immediately went to take a look.

"There were two wounds on the man's head and he was bleeding non-stop."

The 30-year-old said she first advised everyone not to touch the man. She then made sure that he could still move his head and legs, before taking his pulse and checking his breathing.

Ms Kok added: "He was having difficulty breathing and was unresponsive for three to five minutes.

"He later regained slight consciousness and remembered only his name. He then extended his right hand and touched his head."

Ms Kok asked the man if he had diabetes to determine the cause of his fall, but he said no.

Another member of the public used the man's phone to look for his wife's contact and informed her about the incident.

Someone also called the Singapore Civil Defence Force (SCDF) and passed the phone to Ms Kok, who informed them of the man's condition.

Ms Kok remained at the scene until the ambulance arrived.

The SCDF confirmed that it received a call for medical assistance at about 8pm and conveyed the man to TTSH for treatment.