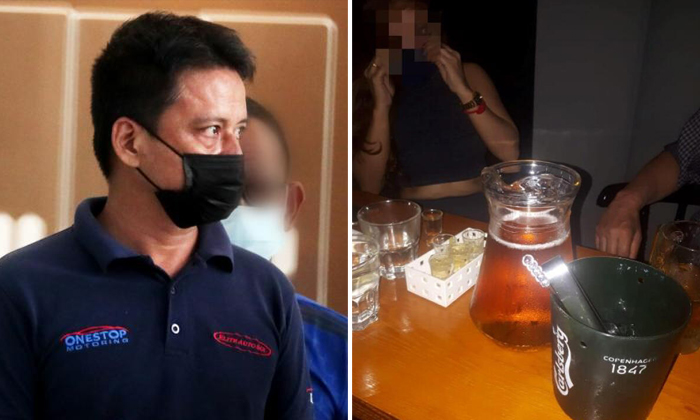 The former owner of a firm called Mad Monk was fined $12,000 on Friday (March 11) after the authorities repeatedly witnessed his pub unlawfully serving customers in 2020 amid the Covid-19 outbreak.

Kevin John Ooi Kam Loke, 47, had pleaded guilty to two charges under the Covid-19 (Temporary Measures) Act. A third charge under the same Act was considered during sentencing.

At the time of the offences, Mad Monk pub at Concorde Shopping Centre in Outram Road did not have a conditional permit, approval or exemption from the Ministry of Trade and Industry to operate.

At around 11pm on Oct 9, 2020, enforcement officers from the Singapore Tourism Board received a call that music and noise could be heard coming from the pub.

They arrived there about 20 minutes later and saw several groups of people seated across four tables, drinking alcohol and chatting.

In his statement, Ooi falsely told an officer that he was a part-time staff member of the pub and reported to one "Ken".

Deputy Public Prosecutor Gladys Lim said: "Subsequent investigations, however, revealed that the accused was in fact the occupier of the pub. The accused had taken over (its) management... since January 2020."

Ooi re-offended soon after and was caught after the police received a call at around 10.30pm on Nov 8, 2020, stating that the pub was still operating and its patrons were "making noise".

A policeman turned up about 30 minutes later and saw that there were about 20 patrons there. Ooi then told the officer that the pub was closed and the patrons were leaving.

The court heard that the policeman came back at around 11.30pm, only to see that the lights were still on and there were people inside the pub.

He entered the premises with his colleagues about 20 minutes later and a search uncovered two customers hiding in a storeroom.

One of them then told the police that Ooi was the one who had told him to hide there.