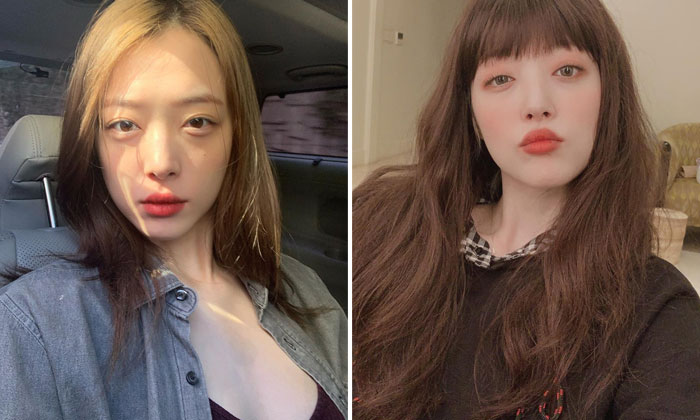 The singer and actress, whose real name was Choi Jin-ri, was 25.

The South Korean police have confirmed her death, South Korean media reported. According to The Korea Herald, her manager found her dead on the second floor of the house on Monday afternoon.

He visited the house as he had been unable to reach Sulli after their last phone call on Sunday evening.

The police are investigating the case.

“It seems that Choi was living alone at the house,” a police official said. “It looks like she ended her life but we will investigate, (and are) open to all possibilities.”

Singer Amber Liu, a f(x) member who left SM Entertainment this year, posted in an Instagram story: "Due to recent events I'll be putting on hold my upcoming activities. Thank you for your thoughts."

Liu had been in the midst of promoting and releasing tracks from her new EP, which was slated to be out next year, in January.

Sulli originally gained prominence as a child actress playing the role of Princess Seonhwa of Silla in the 2005 period series Ballad Of Seodong.

She later debuted as an idol under SM Entertainment as part of girl group f(x) in 2009. She took a hiatus from the group in 2014, citing malicious online comments targeted at her. She left the group officially in 2015, but remained with SM Entertainment.

As an actress, Sulli had been known for starring in series such as To The Beautiful You (2012). She made a cameo appearance in this year’s South Korean fantasy drama Hotel Del Luna and was recently cast in the upcoming sequel of anthology series Persona, which was set to be released next year. Persona 2 was to be her first major acting role in two years.

She openly dated hip-hop artist Choiza from 2014 until their break-up in 2017, even posting photos of themselves on dates, which is a no-no in the highly controlled world of K-pop.

Sulli was in the news earlier in October over a wardrobe malfunction. She was getting her hair and make-up done in an Instagram Live broadcast and donned a loose robe, which exposed her breasts.

Asked by netizens why she went bra-less, she said: “I don’t get what’s wrong. This is my personal freedom.”

But her take-charge, confident ways mask another side of her character.

Recently, while shooting an episode of JTBC’s Reply Night, she said: “I think everyone has different sides to them.

“The real (me) has a darker side, but the celebrity Sulli always has to act like she’s cheerful.

“I asked for a lot of advice from people around me because I wondered if I was lying to people. All people have a darker aspect to them, but they just act like they don’t. We’re living ambiguously.”

News of her death has shocked K-pop fans, with her name trending worldwide on Twitter.

It comes less than two years after the death of another SM Entertainment artist - Shinee’s Jonghyun - who committed suicide at age 27 in December 2017.

Jonghyun had been battling depression before his death, which prompted other K-pop artists like BTS’ rapper Suga to speak up about mental health awareness.

South Korea is known for having some of the highest suicide rates among developed nations and its celebrities are not immune.

Actress Jeon Mi-seon died in June this year of a suspected suicide, while Winter Sonata (2002) star Park Yong-ha killed himself in 2010.

The entertainment industry in South Korea, especially K-pop, is notorious for its pressure-cooker environment, where idols train for years before debuting, are given meagre allowances and have gruelling performance schedules.

Idols are routinely criticised for their looks and even the clothes they wear - both Mamamoo’s Hwasa and solo act Hyuna have been criticised for wearing revealing outfits.