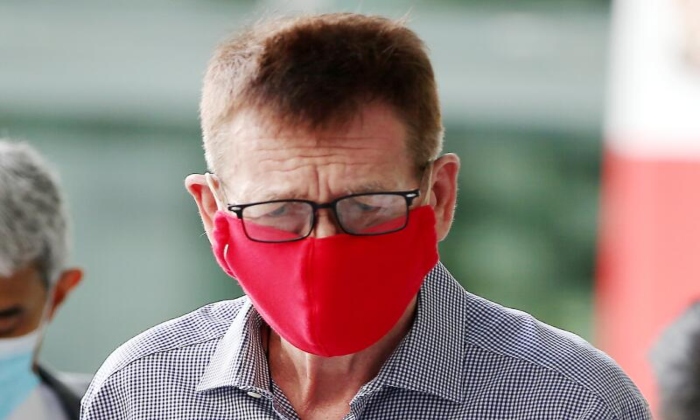 A Briton who had taught in Singapore for more than 30 years was sentenced to nine months' jail on Thursday (Aug 27) after he pleaded guilty to consuming methamphetamine, also known as Ice.

Christopher David Burge, represented by Withers KhattarWong lawyers Chenthil Kumarasingam and Adeline Goh, committed the crimes in September 2018. He was then employed at Hwa Chong Institution.

His lawyers told the court that Burge was suffering from psychiatric disorders at the time which were brought about by his father's death in a car accident that was caused by Burge falling asleep at the wheel.

The court heard that the Central Narcotics Bureau, acting on a tip-off, found drugs in Burge's home in Linden Drive near Eng Neo Avenue on Sept 20, 2018.

The authorities also found drug paraphernalia, including glass apparatus with a straw and a pipe attached, as well as at least 6.12g of vegetable matter which was analysed and found to contain a substance found in synthetic cannabinoids.

In the course of investigations, Burge said that he consumed the drug because he enjoyed it, and would have continued consuming it if he had not been arrested.

On Thursday, the defence argued that Burge was acting out of character during this period as he suffered from psychiatric disorders following the car accident in the United Kingdom in December 2017.

The court heard that Burge was later charged in the UK for the head-on collision caused when he fell asleep at the wheel while driving his 95-year-old father to an appointment. His father died from injuries caused by the accident.

Arguing for a probation report to be made, the defence submitted a medical report which said Burge suffered from insomnia and adjustment disorder at the time. The report found that Burge no longer suffers from these disorders.

His lawyer added that if the prosecution found Burge to be unsuitable for probation, a lighter sentence should be considered in the light of the "special circumstances".

Deputy Public Prosecutor Rebecca Wong argued for a 14-month jail sentence, noting that the doctors' assessments were that Burge knew what he was doing at the time and "knew that drug offences were both morally and legally wrong".

The defence said that since his arrest, Burge has been seeking both professional help and been given support by his former students at HCI, some of whom also attested to his good character.

In sentencing, District Judge Ong Luan Tze reminded Burge, who the court heard has a daughter who had also committed drug-related offences, that drug offences are taken very seriously in Singapore and only in exceptional case can "deterrence be displaced by probation".

While she accepted the mental disorders present at the time and noted there may have been a causal link, she was "not convinced" deterrence should be displaced since Burge knew the offences were wrong and still committed them.

Burge will be appealing against the sentence.

Last year, HCI told The Straits Times that Burge has been suspended since September 2018. ST has contacted the school to find out if he is still employed by the school.