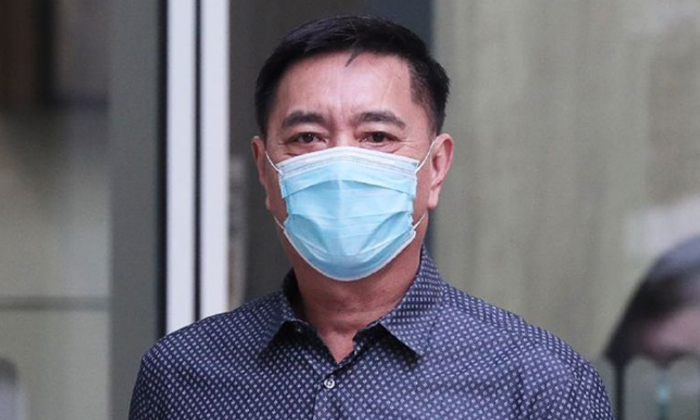 A Bangladeshi worker who was allegedly assaulted by his former employer, retired actor-director Ng Aik Leong, told a court on Monday (Nov 30) that he lived in fear while working for Ng, as the latter often blew up at him over work.

Ng, 59, stands accused of voluntarily causing hurt to Mr Jahidul, who goes by one name, over a Dec 11, 2018 incident where he used a metal scraper to hit Mr Jahidul on the abdomen and head.

On Monday, in a continuation of the trial that began on July 27, Mr Jahidul testified that Ng had frequently yelled at and threatened him, even challenging him to fights.

Mr Jahidul, 34, said he was performing some cleaning works at the Singapore Islamic Hub under Ng's supervision, when Ng grew incensed after finding out the worker had used a rope shorter than what he wanted.

According to Mr Jahidul, Ng threw a plastic pail and wooden plank at him. Mr Jahidul said the pail hit him on the back, and he climbed down from the ladder he was on as he was frightened.

Ng, who is better known as Huang Yiliang, then allegedly assaulted him with a metal scraper in the abdomen and on the head, resulting in bruising on Mr Jahidul's scalp and some abrasion. The two had a small tussle over the scraper, said Mr Jahidul.

When he walked out to call the police, Ng told him to return to their work space so he could beat him up. Ng said he could not do it outside as there were closed-circuit television cameras there, said Mr Jahidul.

Mr Jahidul also produced audio clips in court, recorded before the incident, of an enraged Ng yelling Hokkien and English vulgarities at him. The two had lived together in Ng's home.

In one of the recordings played out in court, Ng was heard belittling Mr Jahidul's upbringing, noting that he came from a poor village and did not know how to work.

Mr Jahidul said Ng was angry over an incident where Mr Jahidul had been charged an extra 50 cents for some work tools at a shop purportedly owned by Ng's friend.

"Boss is a very dangerous people (person). Boss can kill you, understand?" Ng told Mr Jahidul in one of the audio clips.

Ng was also heard challenging Mr Jahidul to a fight, telling him to "sign" something for a "one-to-one" fight.

"I don't even dare to answer him, I'm always frightened of him," Mr Jahidul told the court.

In another recording, Ng called Mr Jahidul names over an issue with their work clothes, and Mr Jahidul told him to "send me back".

"He took the old pants and threw it in my face.... That's why I told him to send me back to Bangladesh, send me back home," said Mr Jahidul.

In cross-examination, Ng, who represented himself, claimed that Mr Jahidul had plotted to set him up. He said he treated Mr Jahidul as a friend and had faked his punches with him.

Ng also claimed that Mr Jahidul thanked him for being a mentor, and had asked to be "hit" so he could "learn and progress".

Ng charged that Mr Jahidul acted dumb with him at least once a day on purpose, in order to aggravate him.

"Obviously, you are making use of police resources to terminate the (work) contract with me," said Ng in court, addressing Mr Jahidul.

Addressing Ng, he said: "I called the police to save my life because you hit me."

The trial continues on Tuesday (Dec 1).