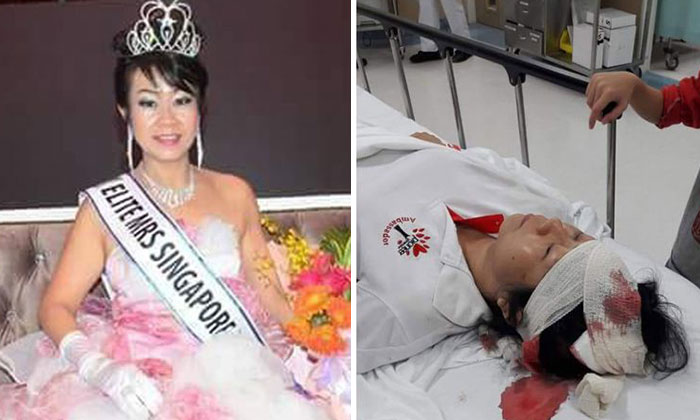 A former beauty queen suffered injuries on her face and head after an accident with an e-scooter rider at the Bishan-Ang Mo Kio Park, near Block 237 Bishan Street 22, at about 2pm on Tuesday (June 5).

Cassandra Ho, 49, who was crowned Elite Mrs Singapore Asean in 2016, had been on her way to a community garden at the park at the time of the incident.

Madam Ho had intended to pick herbal leaves for the father of a friend who was ill.

According to Lianhe Wanbao, she had planted the herbs herself.

After the accident, she was taken to Tan Tock Seng Hospital for treatment.

She remains warded and told reporters that her recollection of the event was hazy although she was conscious after the accident.

“I can't remember much... the next thing I knew, I saw my husband and youngest son beside me in the accident and emergency ward.”

However, Madam Ho said that she remembered sending a few short messages to her husband after the accident.

She said that she suffered a laceration about 3cm long on the back of her head, and the right side of her face is also swollen.

Madam Ho added that she still feels dizzy and is physically weak, but is relieved that she was not disfigured.

As a grassroots volunteer, Madam Ho said that many residents have given feedback that the parks are no longer safe to walk with fast-moving e-scooter riders.

Madam Ho’s husband said that they would report the case to the police.

In response to media queries, the Singapore Civil Defence Force (SCDF) said that it was alerted by members of the public to the accident at 2pm on Tuesday, and Madam Ho was taken to Tan Tock Seng Hospital.

The number of accidents involving personal mobility devices (PMD) has been on the rise with 128 cases in 2017, reports The Straits Times.

The Land Transport Authority (LTA) has ramped up its enforcement actions by patrolling areas with a high volume of human traffic.

Public consultations were recently conducted by the Active Mobility Advisory Panel to gather feedback regarding the use of bicycles and PMDs.

The result of the consultations will be considered when the panel makes recommendations to the Government on possible changes to the current regulations on bicycle and PMD usage.