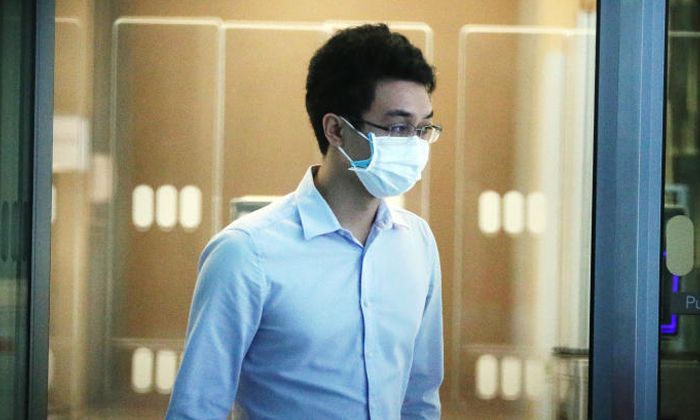 A man who was working as a research officer for the Agency for Science, Technology and Research (A*Star) assaulted an auxiliary police officer who caught him fishing unlawfully at a non-designated spot at Upper Seletar Reservoir.

On Monday (Jan 17), Chua Ci Jie, 29, was convicted of four charges - three offences under the Parks and Trees Act and one count of using criminal force against a public servant.

In her submissions, Deputy Public Prosecutor Esther Wong said that Chua was illegally fishing at the reservoir when he was caught by Mr David Sativel, an auxiliary police officer who worked for the National Parks Board (NParks) at the time.

Mr David asked Chua for his particulars and the encounter was recorded on his body-worn camera, the court heard.

Chua knew he had committed an offence but refused to provide the officer with his details, said DPP Wong.

"Instead, he tried to remove himself from the scene and subsequently ran down a nearby slope," she said.

Both men tumbled down the slope as Mr David gripped on to Chua's bag to prevent him from getting away, said DPP Wong.

"After getting up, (Chua) pushed the officer once before making his escape," she added.

The court heard that Chua worked as a research officer for A*Star at the time of the incident on Nov 30, 2019.

At around 4.45pm, he was near toilet C at the edge of the reservoir using a rod to cast a fishing line into the water, around 1km away from the nearest designated fishing spot.

Mr David and the accused rolled down a slope near Mandai Road, Track 7, and Chua ran away as other officers chased him.

They caught up with Chua, who eventually stopped 200m away, and asked him for his particulars. Chua initially refused but later provided his NRIC from his wallet.

In her submissions, DPP Wong said: "In his attempt to avoid legal repercussions for his offence, he refused to provide his particulars to David at first instance and pushed him at the bottom of the slope to deter him from obtaining his particulars."

She added that Chua's defence has been inconsistent and said: "His insistence on denying the truth of matters that are plainly captured on video erodes any credibility he has."

In response to queries from The Straits Times, A*Star said that Chua left the organisation in July 2020.

Chua will return to court for sentencing on Jan 24.

Related Stories
Men throw bread crumbs into water at Marina Promenade, reel in terrapins and place them in bag
Youths flee after man catches them fishing illegally at MacRitchie and calls PUB "on the spot"
Youths fish illegally near Esplanade, leave upon seeing Stomper take pics of them
More About:
court
assault
fishing
NParks