Foodpanda rider refuses to deliver food to customer's unit, duo proceed to hurl insults at each other via text 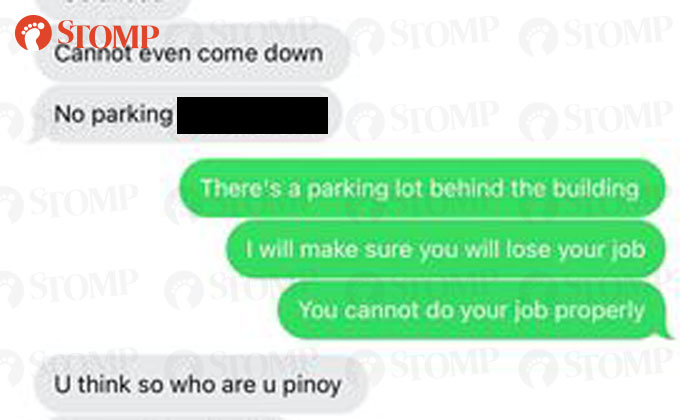 A Foodpanda customer and delivery rider hurled insults at each other via text over a disagreement on Sep 16.

A Stomper shared with Stomp her unpleasant experience after ordering a meal from Alt. Pizza using the app.

"I ordered from Foodpanda and encountered a rude rider," she said.

"The rider asked me to go down to collect the food myself.

"I disagreed because she was supposed to be the one to deliver the food to my unit.

"She called me and after I refused to go down, she hung up on me and started texting me."

In the text exchange, the rider used a Tagalog swear word and said there was 'no parking'.

The Stomper replied in frustration that there was parking behind the building and said, "I will make sure you will lose your job".

"You cannot do your job properly."

The rider retaliated and said the customer is "not even local", intending it as an insult.

Despite the Stomper saying she would report this to Foodpanda, the rider insisted she come down to collect the food herself.

"I complained to Foodpanda as well but I’m not satisfied by their action, as they didn’t give me any clarification for what course of action or penalty they should do with the rider," said the Stomper

"I don’t want anybody else to experience what I have experienced.

"She was so rude.

"She is not suitable for her job."