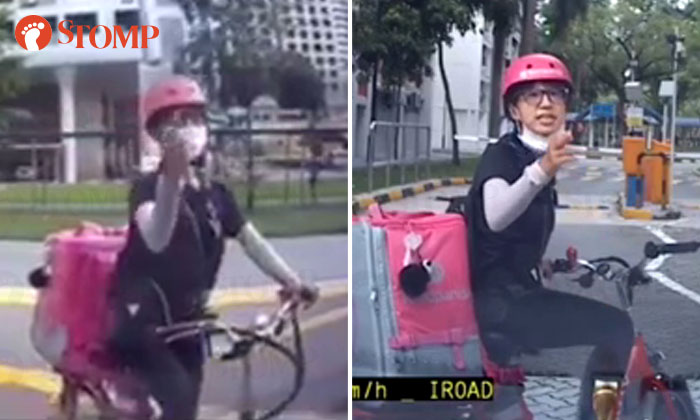 The police are investigating a dispute between a Foodpanda rider and a driver that happened at Choa Chu Kang on July 3.

Stomper Jeff shared with Stomp a video of a Foodpanda rider flashing her middle finger at him before chasing after his car.

In the video, the cyclist who points her middle finger at Jeff's car after he travels past her and turns into a carpark near Block 789.

She then rides in front of him and blocks his path as she shouts and gestures at him.

Jeff told Stomp he did not realise the audio function for his in-car camera was turned off and was unable to capture what she said.

"She just was not happy that I turned right in front of her even though I had moved forward to make sure that I kept a safe distance for her to have time to slow down," he said.

"If I had done that, all the cars behind me would have thought I was inconsiderate to road hog.

"She showed me the middle finger, blocked my car from moving off and even opened the passenger door to ask me to get out of the car for a one-on-one fight.

"She also didn't put on her mask while talking.

"In the end, I ignored her and drove off immediately."

Jeff said he made a police report following the incident.