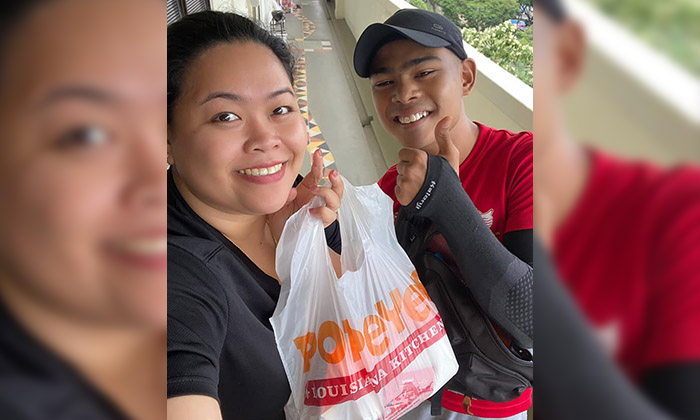 Did you ever have to cancel a food order because you had put in the wrong address for delivery?

Well, I have. But not every one wound up in the same situation.

Facebook user Charlene Pagayon Rosco shared in a post that she met a Foodpanda rider, Muhammad Nur Syahir, who went the extra mile to deliver her food after she had given the wrong address.

Charlene had ordered food via Foodpanda on Jan 4 and was certain that the right address was indicated since it showed: "Home".

She later received a Foodpanda notification saying her rider had arrived. An unknown number also sent her a message saying he was at level one and asked where she was.

Confident that her unit number was in the address, Charlene was confused.

Unfortunately, she realised after checking that she had given the wrong address. Syahir was at Holiday Inn Singapore Orchard City Centre, where she was at last New Year's Eve.

She apologised to Syahir, asked if he could deliver the food to the correct address in Braddell and offered to pay an extra fee.

Syahir said he couldn't, so she offered the meal to him. Charlene also said she would transfer him money for the food since she had opted to pay upon delivery.

He then asked Charlene if she was hungry, to which she said yes but insisted that he had the food.

After a while, Charlene received another message from Syahir who asked if she lived near Beatty school. He told her he was going to the correct address and later appeared at Charlene's doorstep with her food and a wide smile.

Charlene said in her post: "I found out that Mr Syahir is deaf, which amazed me more because disability, is not a hindrance to do such an excellent service towards customers."

Related Stories
Motorists stop by side of Yishun road to help pick up items that fell from back of van
Woman taken to hospital after collapsing at Novena: 'Helpful passers-by stopped to help'
Kind uniformed staffer guides man with walking stick to train platform at Bugis MRT Station
More About:
foodpanda
heartwarming
inspiring
kind