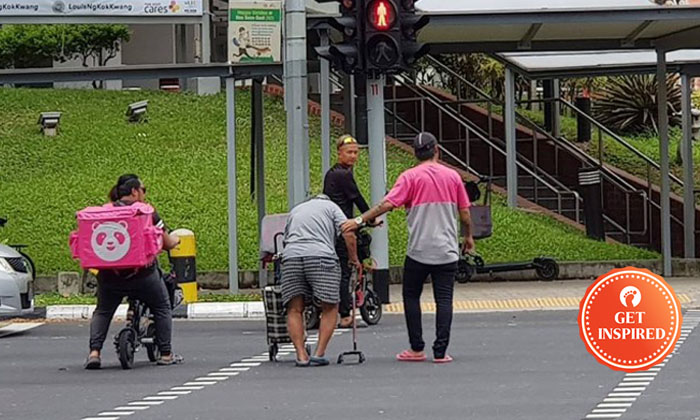 A Foodpanda deliveryman took time off his busy schedule to help an elderly uncle struggling to cross the road at a traffic light junction opposite Northpoint City.

The incident which took place on Oct 24 at 1.30pm touched Facebook user Siti Nurjannah Kamil, who posted a picture of it on Facebook.

Stomp reached out to Siti, who said: "I was so touched and proud of the Foodpanda guy's initiative.

"He might have had food in his bag to be delivered or was going to collect another order from an outlet, but he made the great effort to patiently help the uncle cross the road."

In the picture, the uncle crosses the road with a trolley and uses a walking stick.

Facebook user Stefanie Suhashini commented that she had seen the elderly man cross the road in Yishun in the early morning before.

She added that the man takes more than five minutes to cross that road and that the traffic light turns red for pedestrians before he reaches the other side.

Facebook user Hellen Sebastian said the uncle sold tissues at an MRT station in the morning and would go home in the evening.

"I was there that afternoon to witness such a kind soul movement by an ordinary delivery guy. The outlook and status of a person doesn't measure how big, kind and awesome his heart is.

"Basically never judge a book by its cover," Siti added.

She also said that she hopes the deliveryman gets the recognition he deserves.

Related Stories
Biker who stopped to direct traffic gets Goody Bag: "When I saw it on Stomp, I knew it was a big deal"
Men rush to stranded uncle's aid in Woodlands after seeing appeal for help on Facebook
Grab driver provides lollipops and water for passengers: "If I can give him more than 5 stars, I would!"
More About:
foodpanda
inspiring
kind
kind acts