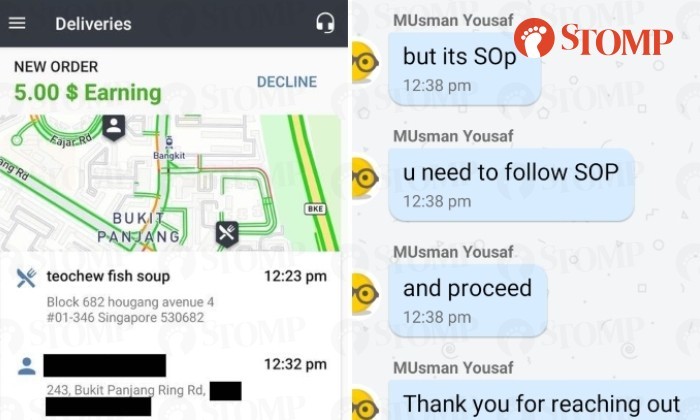 Foodpanda has apologised for a technical issue that resulted in a deliveryman being asked to travel 20km from Bukit Panjang to Hougang to pick up a food order — for just $5.

Stomper Chen had just started work as a deliveryman with Foodpanda less than a month ago and said it has been relatively smooth-sailing thus far.

That was until he was asked to travel from Bukit Panjang to Hougang to collect a customer's order, and then travel back to Bukit Panjang again to deliver it.

The incident, which occurred on Nov 21, has since garnered much attention on social media.

"I'm a Foodpanda deliveryman and my only mode of transport is my bicycle," Chen said.

"So, I was shocked when I was allocated to a delivery where I had to travel from Bukit Panjang to Hougang to collect a fish soup order for a customer.

"What's worse is that the customer lives in Bukit Panjang, which means after travelling to Hougang, I have to go back to Bukit Panjang to deliver the food. That makes no sense.

"I also did a check, and I realised that the Teochew fish soup stall that the customer ordered from has an outlet in Bangkit, which is nearby.

"So I popped by the Bangkit stall, in hopes that I could collect the food from there instead of travelling all the way to Hougang. However, the stallholders told me their Bangkit outlet does not accept Foodpanda orders."

Chen told Stomp that he did not want to cancel the order as it would affect his batch rating.

Chen explained that the more times a deliveryman does not accept an order given, they would be given a lower batch rating.

This, in turn, affects the amount of money they can make per trip.

"I didn't want to reject the order because that means a lower pay for subsequent delivery trips. I can't afford to have that happen," Chen added.

"So I decided to contact the Foodpanda team to ask them what I can do about this issue. In the end, they told me it's their standard of procedure (SOP) and I just have to follow it.

"I felt really disappointed because I knew the trip from Bukit Panjang to Hougang and back would take at least four hours.

"Four hours for $5? I could have used the four hours to make other trips and earn more money for my family.

"And I think the food would have been cold by then. I also wouldn't want the customer to receive cold food.

"In the end, I had no choice but to redispatch the job."

Chen shared that he had been recently retrenched due to Covid-19, and that he got this job to continue to support his family.

"Every second in this job is important to me because for every additional trip I make, that means more money for my family.

"This job is not easy. I have to work nine hours daily for seven days a week to earn a sustainable amount.

"I heard from my friends who are also deliverymen that this is a glitch that rarely happens. I just hope that no one else has to deal with this issue, because it affected my batch rating and now I get less money per trip.

"Maybe Foodpanda can consider having a support hotline that we can call should such glitches happen again? That way, we can explain what is going on and hopefully, other deliverymen won't have to experience this same problem."

In response to a Stomp query, a Foodpanda spokesman said: "We are sorry for the technical issue that has affected Mr Chen's delivery experience with us. We take our riders' feedback very seriously."

The spokesman added that Foodpanda has since looked into the matter and rectified the location error.

"We will also continue to take steps to improve and train our service teams to ensure that our riders are given proper support," said the spokesman.