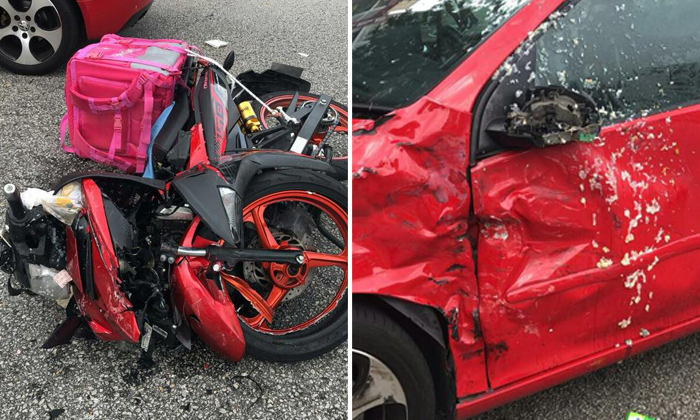 A 32-year-old man was taken to hospital with traumatic injuries after an accident involving his motorcycle and a car in Choa Chu Kang on Friday afternoon (Oct 5).

In response to a Stomp query, the police said they were alerted to the accident at the junction of Chua Chu Kang Drive and Teck Whye Avenue at 1.14pm.

The motorcyclist was unconscious when conveyed to National University Hospital (NUH).

In an updated statement on Oct 6 at 5.30pm, the police told Stomp that the 42-year-old driver was arrested for causing grievous hurt by a negligent act.

Facebook user Chomel Icious had posted about the accident, along with photos showing a red Volkswagen that was badly dented on its left and a damaged motorcycle with a Foodpanda delivery bag still attached to it.

A man can also be seen lying face-down on the ground while several others attended to him.

Stomp understands that the man is a Foodpanda delivery rider.

Chomel wrote in her Oct 5 post: "We’re all here for you, waiting to see you soon and hoping for a good news."

It is believed that the car driver had been travelling on the right-most lane of Choa Chu Kang Drive prior to the accident.

When he reached the junction, the traffic light was red but there was a green right-turn arrow displayed, reported The Straits Times.

The driver started to make a right turn, but felt a bump against the side of his car when the motorcycle collided with it.

It is unclear what led the motorcycle to crash into the car.

Chomel added in her Facebook post: "Please take note: How the tragic accident happened is still under further investigation. Please do not spread rumours or assumptions. Your co-operation is much appreciated. Thank you."

Responding to a Stomp query, a Foodpanda spokesman said: "Our thoughts are with the rider and his family.