Foodpanda delivery guy looking for witnesses after getting hit by car at Jurong West: "I can't remember anything" 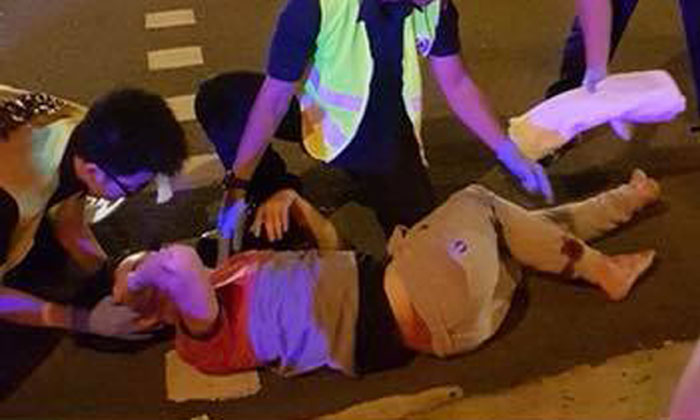 A motorcyclist is looking for eyewitnesses after he was involved in an accident with a car at the junction of Jurong West Avenue 2 and Corporation Road on June 6 at about 9.15pm.

Ter Wei Jie, who was working as a Foodpanda delivery rider at the time of the incident, made a post on Roads.sg's Facebook page appealing for witnesses to come forward with video footage for the purpose of insurance claims.

In response to a Stomp media query, the police said they were alerted to an accident involving a motorcycle and a car at the above location.

"The motorcyclist, a 20-year-old man, was conscious when conveyed to Ng Teng Fong General Hospital," a police spokesman said.

Stomp reached out to Wei Jie who said that his memory has been affected since the accident.

"I can't remember anything," he said.

"People have to fill me in on what has happened."

He added that he is no longer working for Foodpanda.

If you have any video footage of the accident Wei Jie was involved in, kindly contact Stomp at stomp@stomp.com.sg or WhatsApp 9384 3761.

Related Stories
13-year-old girl sent flying after being hit by car is a warning to all jaywalkers
Man, 80, dies after getting hit by minibus at Woodlands Ave 3, 58-year-old driver arrested
Rider falls off bike then gets run over by van along Second Link in Malaysia
More About:
Accidents
appeal for witnesses
motorcyclist
injured
foodpanda