Foodpanda customer and rider argue over cash-on-delivery: 'I not ATM' 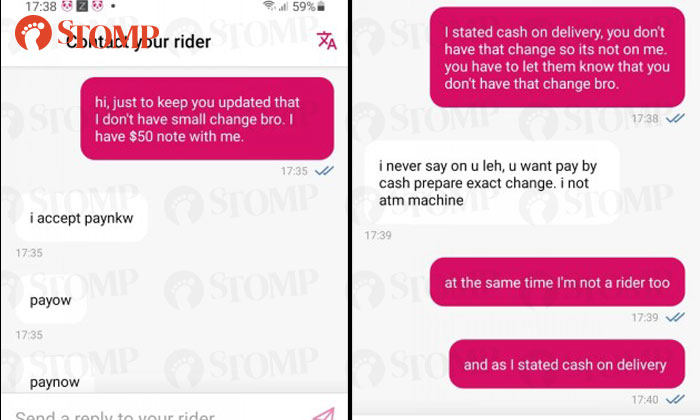 A Foodpanda customer and rider were involved in a dispute via text regarding cash-on-delivery.

Stomper Shamla shared with Stomp screenshots of the conversation after the duo argued over cancelling an order.

"I've been ordering from Foodpanda almost every day but this is the first time I have encountered such unreasonable behaviour from a rider," the Stomper said.

"Usually when I order, it's always in large quantities and as for payments, there has never been an issue.

"However, just because I wanted to pay by cash on Oct 10, it seemed to be a problem for the rider when I told him I chose cash-on-delivery and that I didn't have any small change."

In the texts, Shamla informs the rider in advance that she only has a $50 note and no small change.

The rider suggests she use PayNow instead but she says she had already withdrawn cash to pay for the order.

When he says he has no change either, she requests he cancel her order.

They then argue over who should be the one to cancel.

Shamla says: "I stated cash-on-delivery, you don't have that change so it's not on me."

The rider retorts: "I never say on you leh, [you] want pay by cash prepare exact change. I not ATM."

Shamla insists that as a rider, he should have change but he disagrees.

He requests again that she pay him via PayNow and asks, 'got what difference?'

She suggests that she pass him cash and he return the change via PayNow.

Eventually, the rider says: "Losing brain cells talking to [you]."

He finally cancels the order.

Shamla told Stomp she thought the rider was inconsiderate and rude and that the way he spoke to her was "unacceptable and terrible".

"Kindly let everyone take note of this incident, I hope it doesn't happen in the future."

Related Stories
Foodpanda rider refuses to deliver food to customer's unit, duo proceed to hurl insults at each other via text
Foodpanda customer 'takes advantage' of delivery riders, calls one of them 'stupid'
Customer says Foodpanda rider is 'so rood', tells him to accept $10 cash or PayNow for $14.34 order
More About:
dispute
argument
foodpanda
food delivery
bad service
text