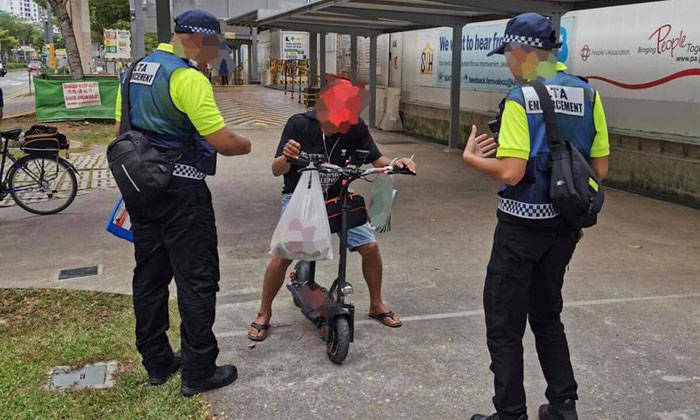 Grab told Stomp any riders caught riding an e-scooter on footpaths from Jan 1 onwards will be permanently banned from the GrabFood platform.

The Land Transport Authority (LTA) said in a Facebook post on Wednesday night that its enforcement officers have started taking strict enforcement action against e-scooter users who are caught riding on footpaths.

The authority added that two offenders were caught earlier that day, one in Yishun and the other in Sengkang.

They could be fined up to $2,000 and/or jailed for up to three months.

In response to a Stomp query, a Foodpanda spokesman said:

"When the new LTA regulations were announced, we have been communicating with all our PMD riders on the urgency of the new regulations through multiple platforms – emails, a dedicated rider website, physical rider hubs and a Telegram channel, where riders are receiving real-time updates.

"They are also able to reach out to fellow riders or their fleet managers for support or if they need any form of assistance.

"Since mid-December, foodpanda has stopped all deliveries via PMDs before LTA penalties officially kick-in to ensure we provide sufficient time for our riders to transition into another mode of transport.

"All foodpanda riders who have previously utilised PMDs as their mode of transportation and wish to continue riding with us have switched their preferred mode of transport for deliveries on our system."

A Grab spokesman told Stomp it is reviewing if e-scooters remain a viable mode of delivery.

"However, as we have received feedback from our delivery-partners that it is increasingly challenging to deliver food on e-Scooters, we will be reviewing if the vehicle remains a viable mode of delivery.

"To provide our partners with more time to consider which vehicle they would like to transition to, we have also secured a 2-week extension of the eTG application.

"GrabFood delivery partners have until 14 January 2020 to decide if they would like to apply for the scheme.

"Additionally, we continue to remind our delivery-partners regularly through in-app notifications, emails and other channels about safety regulations and requirements while travelling on the roads, such as adhering to speed limits, and wearing proper safety gear.

"Our delivery-partners are also aware that they are required to adhere to all local regulations as per our Code of Conduct.

"From 1 January 2020, all riders caught riding an e-scooter on footpaths will be permanently banned from the GrabFood platform."

Deliveroo earlier told The Straits Times that any existing riders on PMDs who have not switched vehicles or applied for Land Transport Authority's (LTA) e-scooter Trade-in Grant by the deadline, which was on Tuesday, will not be able to continue working for Deliveroo until "they confirm they would like to switch vehicles".