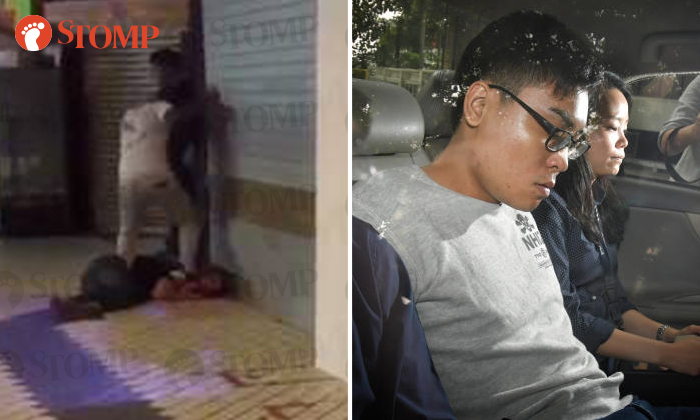 A food stall attendant launched a "barbaric" attack on a man he accused of staring at him, stomping on his face, punching him until he fell unconscious and leaving him needing facial reconstruction surgery.

Wee Boon How was out on bail over an earlier rioting offence when he attacked Mr Bong Hong Yun, 26, in a fight at Golden Mile Complex that was captured on video and went viral online.

The 24-year-old was jailed for three years and nine months on Tuesday (Feb 19) after pleading guilty to causing grievous hurt to Mr Bong. He also admitted to two rioting charges.

The judge added: "There is no place for acts of wanton group violence... in modern-day Singapore, and especially for trivial reasons such as from staring or swearing incidents, where in this case the violence was truly grossly disproportionate to any known provocation."

The court heard that Wee was first arrested after he and at least two other men ganged up to attack a 20-year-old man at an Orchard Road nightspot, leaving the victim with cut lips.

Court documents did not reveal the reasons behind the April 2017 incident.

Police later questioned Wee and he was out on bail when he went to Golden Mile Complex at around 3am on Oct 11 that year.

He confronted Mr Bong on the first storey of the Beach Road shopping mall and accused the older man of staring at him, before a fight broke out between the pair.

Deputy Public Prosecutor Zhou Yihong said: "Some time during the fight... the victim fell onto the ground. The accused did not stop the fight but continuously threw punches at the victim's face until the victim turned unconscious.

"As the victim lay on the ground unconscious, the accused bent down over the victim and continued to throw multiple punches on the victim's face."

After that, Wee stamped on and kicked Mr Bong's face multiple times before leaving the scene. The older man was later taken to Tan Tock Seng Hospital.

Wee was charged in court later that month. He was out on bail again when he got involved in a rioting offence and ganged up with four others to assault Mr Benjamin Woon Boon Hock, 32, at a St James Power Station nightspot.

On Tuesday, defence lawyer Wee Hong Shern pleaded for his client to be sentenced to 3½ years in jail. The lawyer added that Wee has a low IQ and had been exempted from national service. He also said that his client is "genuinely remorseful".

For causing grievous hurt, Wee could have been jailed for up to 10 years and fined or caned.