Food importer and its director fined $30,000 each for importing 6 tonnes of prawns illegally 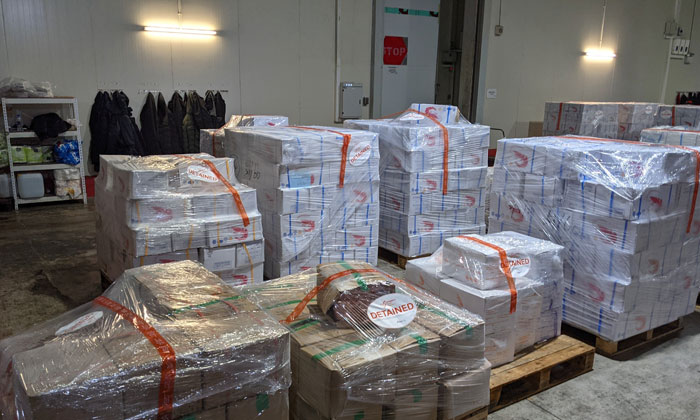 A food importer and its sole director were each fined $30,000 after the firm imported about six tonnes of cooked prawns without a valid permit.

The prawns, which were from Malaysia and China, were seized after the Singapore Food Agency (SFA) found them during a check at Sheng Hai Foods' cold store on March 16 last year.

Yu Fulong, sole director of Sheng Hai Foods, was fined for failing to prevent the offence from being committed at the cold store in Senoko Drive near Woodlands, said the SFA on Wednesday (Aug 3).

SFA said food imports to Singapore must meet its requirements.

It added: "Food can be imported only by licensed importers, and every consignment must be declared and accompanied by a valid import permit.

Those convicted of possessing seafood products imported without a valid permit for the purpose of selling can be jailed for up to two years, fined up to $50,000, or both.

The agency also said in a separate statement on Wednesday that an online grocer, BHL Supplies, was fined $13,500 on Wednesday for illegally operating an unlicensed cold store.

Its director, Kitson Leong Qing Hao, was also fined $10,000 for failing to prevent the offences from being committed.

The agency said its officers discovered the illegal walk-in freezer on Aug 19 last year at BHL Supplies' premises in Gambas Crescent in Sembawang. The freezer was storing various processed meat and seafood products.

About 680kg of meat and seafood products were seized.

"All raw meat and seafood storage facilities must be licensed and are required to meet SFA's requirements and food safety standards.

Those found guilty of possessing any meat or seafood products which have been kept in unlicensed cold stores for the purpose of selling or supplying these products can be jailed for up to two years, fined up to $50,000, or both.