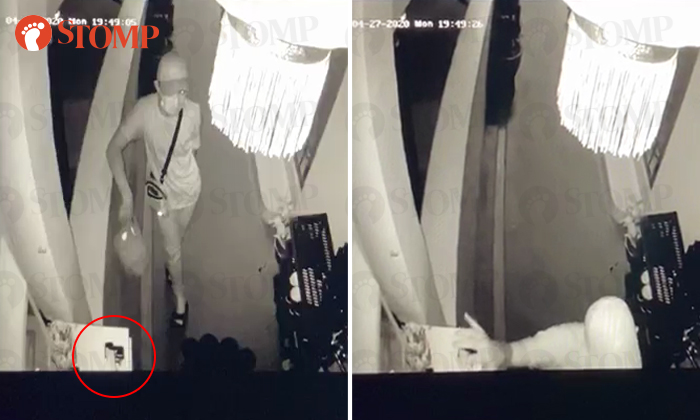 A food deliveryman was caught on camera taking a pack of cigarettes that had been left on a shoe rack while waiting for his customer to open the door.

The incident occurred at Block 523 Serangoon North Avenue 4 on Monday evening (Apr 27), at around 7.49pm.

A Stomper shared CCTV footage of the incident and said his brother-in-law had made an order from GrabFood.

He told Stomp: "The GrabFood delivery guy took a pack of cigarettes from the shoe rack and placed it in his bag while waiting for the customer to collect the food.

"My brother-in-law went to check the CCTV camera when he realised the cigarettes were gone.

"Yes, it’s his mistake for leaving his belongings outside but that doesn’t mean the delivery rider had the right to take anything."

The Stomper said Grab has been informed about the incident.

He added: "We have the rider's details. However, we have decided not to make a police report as we just want him to know that we are aware of what happened."

Related Stories
Grab deliveryman arrested for stealing customer's shoes at Keat Hong Close
Man who grabbed towel from Bedok Reservoir Road corridor not from GrabFood
Foodpanda deliveryman says he was fired after taking statues from altar: 'I had permission from the gods'
More About:
theft
stealing
GrabFood