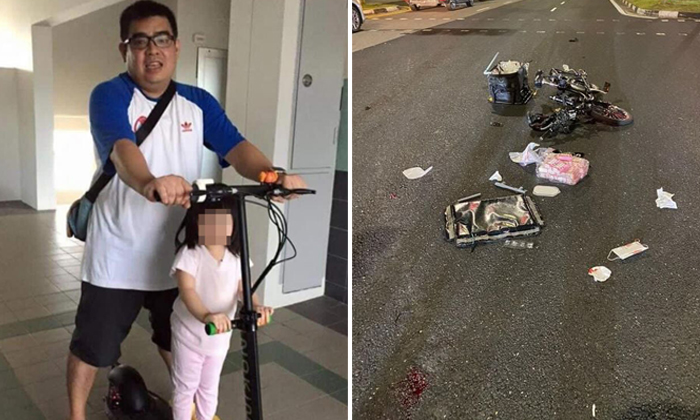 A 42-year-old cyclist died after an accident with a car in Kovan last Tuesday night (March 23).

In response to a Stomp query, the police said they were alerted to an accident involving a car and a power-assisted bicycle (PAB) along Tampines Road towards Tampines Link at 10.11pm.

"The 42-year-old male cyclist was unconscious when conveyed to hospital, where he was subsequently pronounced dead," police added.

Photos posted on Facebook show a Mini Cooper at the scene and the PAB lying on the road. A food storage bag and a bloodied face mask can be seen near the PAB. There was also blood and debris on the road.

According to a netizen who uploaded the photos, the cyclist had been was waiting for the red-turn arrow to turn green before making a turn when the Mini Cooper "came from behind and hit the victim".

"We are appealing for witnesses," the netizen added.

According to Shin Min Daily News, the accident occurred at a T-junction between Tampines Road and Hougang Avenue 1.

The deceased, identified as Simon Teo, had been on his way to make a food delivery at the time of the accident.

Teo, who had been working as a food deliveryman for four to five years, leaves behind his wife and their eight-year-old daughter.

Mrs Teo said that she had been in bed when she was awakened by a phone call from a stranger using her husband's handphone, informing her about the accident.

She rushed down to the accident site, which was about five minutes away from home, and saw paramedics trying to resuscitate her husband.

"I called his name, but he did not respond at all," she recounted.

"I waited in the hospital until wee hours of the morning, when the doctors said that they had tried their best and could not save my husband."

Mrs Teo said she is unable to forgive the car driver for causing her and her daughter to lose a husband and a father.

She added: "I saw his flushed face. He looked like he had been drinking. I will never forgive him and I do not want him at the wake."

Mrs Teo said she has informed her daughter about the tragedy. However, the child would still cry and say that she "misses daddy".

She also said that even though she is working, her husband had made most of the household decisions. With him gone, she feels lost and helpless.