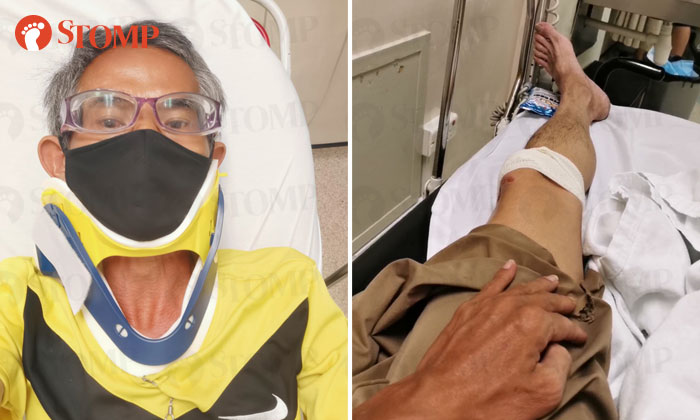 A 49-year-old food delivery rider was taken to hospital after his power-assisted bicycle (PAB) was hit by a car along Kim Seng Road towards Outram Road on Feb 4.

The Deliveroo rider, Stomper Peter, is appealing for witnesses who may have seen what had happened.

"I am the injured party," he said.

"I was cycling when a car travelling at quite a high speed collided into me at the left-most lane, causing me to skid.

"Upon realising what had happened, the driver stopped about 200m away and called an ambulance for me.

"He maintained that he did not notice me and didn't see my hand signal and insisted I was in the wrong.

"Two passers-by helped carry me to sit by the kerb and stayed with me until the ambulance arrived.

"One of them had also noticed the car was travelling at quite a high speed before colliding into me."

Peter added that after he was taken to hospital, he was subsequently discharged from the Accident and Emergency department and given five days of medical leave.

In response to a Stomp query, the police said they were alerted to the accident at 6.57pm.

If you have any information, kindly contact Stomp at stomp@stomp.com.sg or WhatsApp 9384 3761.