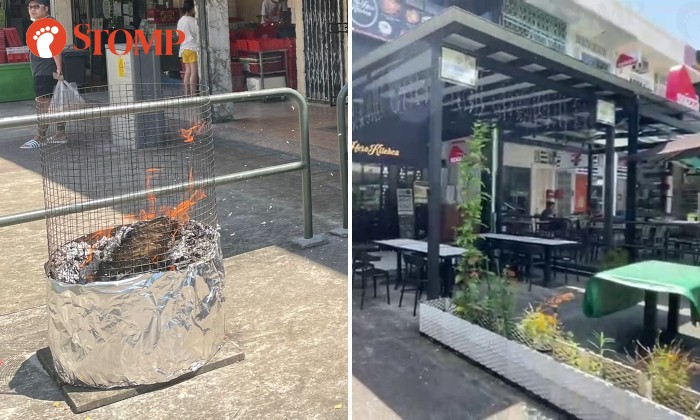 It was an al fresco fiasco.

Restaurant customers dining outdoors at Jalan Kayu were forced to leave due to ashes from the burning of Hungry Ghost offerings outside a neighbouring business on Sunday afternoon (July 31).

Stomper Lala was one of those customers.

She told Stomp: "The seventh lunar month is when there are prayers for Hungry Ghost and the burning of incense. A lot of understanding, tolerance and civic-mindedness is practised during this period.

"However, I was appalled when an F&B business owner ignored public hygiene by burning incense in front of their shop where there are other restaurants with outdoor customers around."

In the photos and video that the Stomper shared, people were seen burning offerings outside a shop called Jane's Cake Station with the wind blowing the ashes towards the outdoor seating of two neighbouring restaurants, Lao Hero Kitchen and Spizza.

Lala said: "Customers who were eating outdoors had to leave the place as the ashes were flying all over the place.

"A restaurant staff member went to tell them about the issue. but they said it was not their problem. As F&B business operators, they were oblivious to the hygienic issues of other F&B businesses.

"With the wind, the ashes were flying like snowflakes."

This year, the Hungry Ghost Festival is from July 29 to August 26.