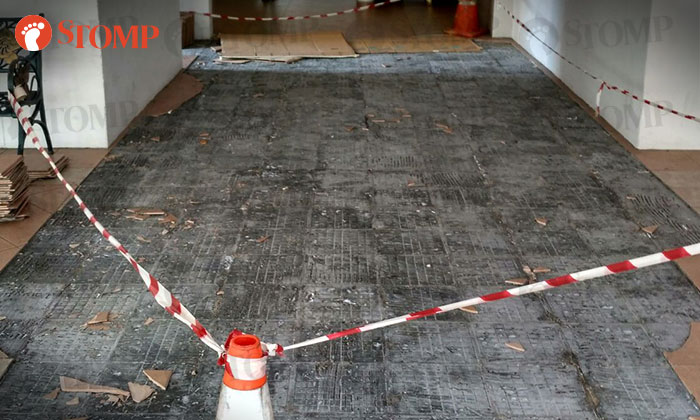 Stomper Hilary was shocked to discover that the tiles at the lift lobby of Block 690A Choa Chu Kang Crescent had popped out after suffering damage.

The incident happened on Wednesday (Feb 21) at around 7pm.

After hearing a loud ‘popping’ sound, Hilary rushed down to investigate and found that some tiles in the lobby had become elevated, while others suffered extensive cracks.

According to Hilary, there have been minor cracks on the tiles since January 2018.

“This is a safety hazard for residents in the neighbourhood.

“Why would this happen at a Housing and Development Board (HDB) flat? Is this a case of the workmanship or was it a tremor?”

In response to a Stomp query, a spokesman for the Marsiling Yew-Tee Town Council said:

"In buildings, tiles do pop up due to a change in temperature, causing tiles to contract and expand. It can also be attributed to the building movement caused by dead load, live load or wind load. To sum up, there is a multitude of varied factors on how it can affect a 17-year-old structure's tiles.

"Upon being notified of the situation, the Town Council had immediately engaged the conservancy workers to remove the loose tiles and barricaded the affected area of Blk 690A CCK Crescent. Rectification works are currently ongoing and the area will be fully reinstated by 26 Feb 2018. The works will be supervised and a quality check will be carried out after completion."

Related Stories
Tiles 'pop out' in HDB flats at multiple estates in S'pore, 'fall apart' at Toa Payoh
Sudden crack of tiles at Telok Blangah coffee shop: 'I was saved by my daughter's decision'
Serangoon North flat owner spooked by 'violent' cracking of tiles: "I thought it was an earthquake"
More About:
cracked tiles
tiles
safety hazard