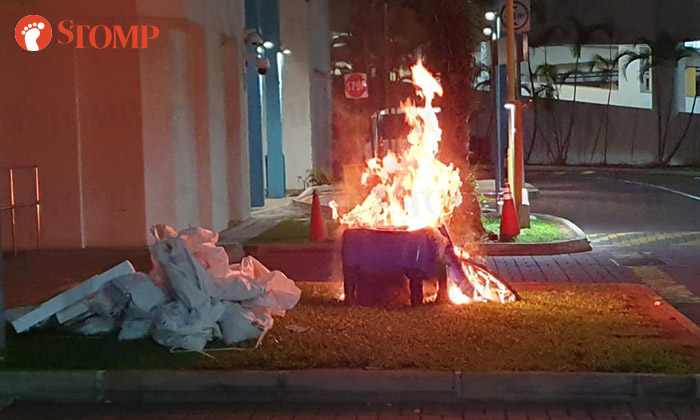 Stomper Kent was walking home when he saw the recycling bin on fire.

He contributed photos and videos of the incident and told Stomp: "I was with my girlfriend at the time, walking from Kallang MRT Station and going towards my house at Block 2A.

"When we were waiting for the traffic light, my girlfriend realised that there was something burning near the recycling bin at Block 2D.

"At first, I told her: 'Eh, don't point. It could be some incense paper being burnt or something.'

"But as we watched for a while more, the fire grew bigger until the flames can be seen coming out of the bin."

The Stomper added: "When the traffic light turned green, we rushed over and observed from a safe distance.

"I immediately dialed for the firefighters. I saw from my call log that I made the call at about 10.42pm.

"The smoke was black and not only that, there were some objects nearby that looked flammable.

"Moreover, the fire was going on at the bottom of a Housing Board (HDB) block. It's very close to people's living quarters!

"When we saw this, we thought that this could be due to a cigarette butt.

"I've seen a lot of people smoking in that area.

"While we don't have any way to justify or prove this, we think that a lit cigarette butt is likely the cause of the fire.

"The firefighters were very swift in responding.

"They arrived at the scene in less than 10 minutes from when I made the phone call.

"I could see them putting out the fire from a window in my unit. Excellent effort!

"All in all, whether this fire was caused by a cigarette butt, I want to say something to all smokers.

"We get it, you're stressed and you want to blow off some steam by smoking. But in Singapore, we have lots of places designated for you to dispose your cigarette butts.

"Be a good citizen or even a good parent. Be a role model.

"Today, it was a recycling bin that caught fire, but what about next time?

"Fires can occur in the most unexpected places, so be responsible and smoke responsibly."

Stomp understands that there was a fire incident at Block 2D Upper Boon Keng Road at about 10.42pm. The fire involved the contents of a recycling bin and was extinguished by police officers.

Related Stories
Mazda driver gets out of car in time before it's engulfed in flames on TPE
75 residents evacuated after unattended cooking causes fire in Woodlands flat
Fire breaks out at industrial waste management site in Tuas
More About:
fire