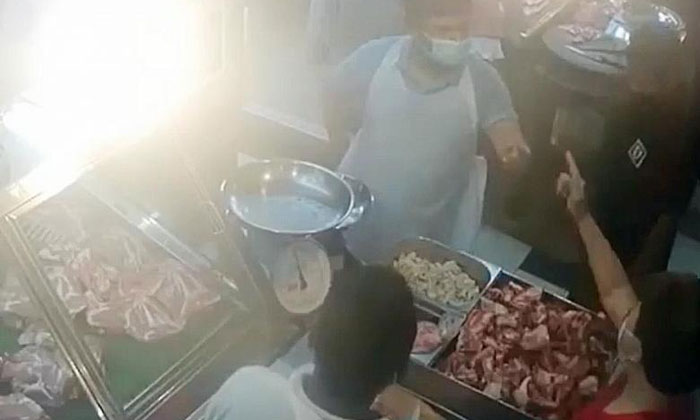 The fishmonger who punched and spat on a mutton seller, Mr Nizamdeen, near their Tekka Market stalls, has been fined $300 for breaching safe distancing measures.

The pair had got into a heated argument last Saturday over long queues from another stall blocking the fishmonger's display.

The incident led to the 68-year-old woman punching Mr Nizamdeen's arm and stomach area before spitting on his left cheek and arm.

The act was caught on closed-circuit television. A police spokesman said they were alerted to a case of criminal force at Block 665 Buffalo Road on Saturday.

The parties involved were advised on their legal recourse, and the woman was subsequently issued with a notice of composition of $300 for breaching safe distancing measures.

After the incident, Mr Nizamdeen, 40, went to Tan Tock Seng Hospital for a check-up but was not asked to do a swab test.

He told The New Paper: "I am worried about catching the virus but I don't want to think too much about it."

"I just hope the auntie is healthy as well," he added.

While both parties have returned to the market, Mr Nizamdeen said the atmosphere has soured as the neighbours and friends for 11 years no longer speak to each other.

He said: "Even though it is business as usual, I can see that the auntie who is usually loud is more quiet now."

The long-time mutton seller said he was not ready to forgive her. He has also lodged a magistrate's complaint about the incident.