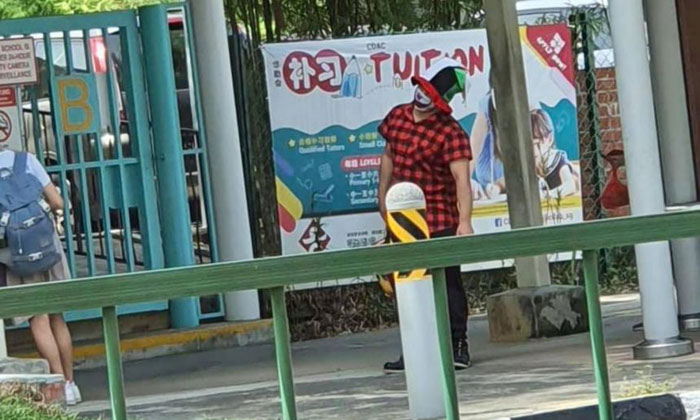 The company behind a marketing campaign that got people to dress up as clowns and hang around outside primary schools has apologised for the panic caused.

One such character was spotted outside Tao Nan School in Marine Parade, prompting the principal of the primary school to send an alert to parents to advise their children to avoid following the clowns.

Mr Kelvin Tan, the director of Speech Academy Asia, told The Straits Times that its marketing team had been sent to areas in the east and west of Singapore over the past two weeks to promote the school's courses.

Apologising for the commotion caused, Mr Tan said the marketing team did not expect the backlash after getting the clowns to hang around outside primary schools as part of a campaign to encourage parents to register their children for their speech classes.

“There was no evil intention behind the costumes and we sincerely apologise for it,” he said. “We will not do it again.”

He denied suggestions that the clowns had persuaded the pupils to follow them. “Our employees wouldn’t go around saying such things,” he added.

Dear Parents, With reference to the news spreading online, of a promoter clad in a clown costume spotted outside...

The marketing stunt led to Speaker of Parliament Tan Chuan-Jin posting a photo of one of the individuals, who was dressed as a clown and seen in Bedok South, on his Facebook page on Monday (Sept 20).

Mr Tan Chuan-Jin, who is MP for Marine Parade GRC, said: “Whoever is doing what I assume to be some viral marketing nonsense, stop it!”

He added: “I trust the police are investigating this. It’s not amusing and just plain dangerous.”

Manpower Minister Tan See Leng, who is also a Marine Parade GRC MP, urged parents to remind their children to be vigilant and stay within school grounds if they are waiting for their parents.

Mr Kelvin Tan said the company’s roadshow team members were asked to don “cute mascots” as part of their outreach efforts but he was not aware that they would be dressed as clowns.

“Maybe the clowns were too scary. It’s wrong and we won’t do it again,” he repeated.

The clown sightings had caused a stir in online communities in the past week.

In a letter to parents seen by ST, Tao Nan School principal Poh Qinyu told them to advise their children against following the clowns.

The principal also urged parents to tell their children not to be lured by any strangers and to notify the school and the police immediately if any suspicious characters are seen near the school premises.

The clowns had been reportedly spotted in several locations, such as Katong and Tampines, as seen in social media posts in the past week.

A parent, who gave her name only as Madam Shawalati, 36, said that when she picked up her daughter from Angsana Primary School on Sept 15, the child was curious as to why there was a man dressed as a clown.

Madam Shawalati said the “clown” wore a plastic reusable mask with a big red nose and lips, and had grey contact lenses.

The clown, who was outside the school in Tampines Street 22, spoke in Malay and persuaded her to register her daughter for a speech class.

Madam Shawalati, who works at the airport, said: “Since it is a marketing thing, I understand that it is important to stand out. All eyes were on him.”

She added: “But the way they dressed make them a red flag and it will alarm kids.”

Police said in a statement to ST that they have received multiple reports of people dressed as clowns and approaching children at various primary schools.

“Members of the public are advised to stay away from strangers and to report any suspicious persons or activities to the police,” a police spokesman said.

Police investigations are under way.